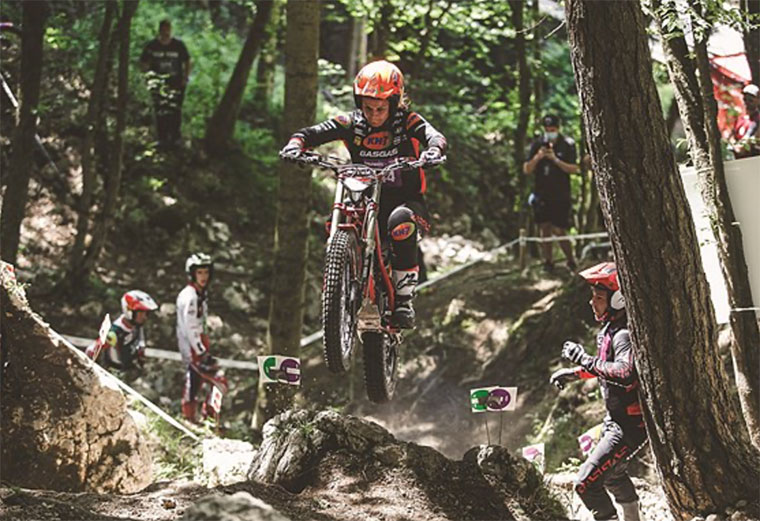 Back in world championship competition for the first time in eight years, and back to the top step of the podium! Laia Sanz has showed she’s lost none of her feet-up skills by winning the opening day of the Women’s Trial World Championship at the GP of Italy. Giving her all to secure victory, Laia then placed a strong second on day two to sit as joint leader of the women’s championship ahead of the second round. With the team’s newest recruit Miquel Gelabert placing a solid sixth on day two, it was an event to forgot for Jorge Casales, who was forced to withdraw from the competition following a positive PCR test result.

Laia Sanz: “Overall, it’s been a great trial for me. It’s been so nice to be back in the trial paddock, and to win on the first day was incredible – it felt so, so good to get that result. It wasn’t easy for me with the non-stop rules, but things worked out really well. The second lap was tough, but I managed to push to the end. I found day two hard. I was already struggling physically a little at the end of the first day, and today, with the heat, I wasn’t at 100%. I made some mistakes on the first lap that really I shouldn’t have made, but I was leading, so I was happy. The second lap was hard, I dropped some extra marks, and Emma was riding well. But there are many positives from this weekend, not least the day one victory.”

Returning to top-flight trial competition on her TXT GP 300 following many seasons competing in rally, Laia took the fight for women’s class victory to the wire on day one of the TrialGP of Italy. With Laia dropping 18 marks on the opening lap while her closest rival Emma Bristow dropped 15, on lap two Laia turned the tables to drop just eight marks to Emma’s 13, topping the day by just two, very important, marks. Making no secret of the fact that she was extremely tired on day two, Laia again rode well, but in dropping 10 marks more than Emma, finished as runner-up.

Finishing a solid sixth in TrialGP on day two, Miquel Gelabert ended the TrialGP of Italy pleased with his riding, but knowing that if it weren’t for a disappointing opening lap on day one he could have secured a better result. Improving throughout the first day, he carried his better form into day two, going on to finish just eight marks from the podium.

For Jorge Casales the TrialGP of Italy was over no sooner than it had started. Forced to withdraw from the event on Saturday following a positive PCR test, he took no further part in the event.

Miquel Gelabert: “Day one wasn’t like I hoped it would be. The first lap wasn’t so good, certainly not what I wanted from myself, but the second lap was better – I was fighting for the top three on that lap. The trial was very good. Every section was possible, but it was also very easy to make mistakes. Day two was better, much better, but I wasn’t able to do enough to finish on the podium. I felt good on my bike, and I ended the day just eight marks from the podium. I lost some marks in the early section today, which hurt my result. I know that I need to be stronger right from the start, which I will work on before the next round.”

Albert Cabestany, GASGAS Factory Racing Trial Team Manager: “Overall, it’s been a mixed weekend, with some very positive results and also an unfortunate and strange situation. Day one was a mixed one for us. On one side we were super happy that Laia was able to take the victory in the women’s class. It was a really tough day and an incredible performance for her, with no ranking from last year she was ahead of her rivals going into each section, so she had no real references. She was incredibly strong mentally, so it was great to finally see her take the win. She was tired on the second day but still did a fantastic job to finish second. Obviously, with Jorge it’s been really disappointing, and really strange. He took his PCR test, like everyone, on Saturday morning, so that he was ready to fly home after the race, and he was stopped during the first lap and told that his test was positive. It’s strange because the team was all tested and negative on Wednesday, we’ve been together all the time here in Italy, and the rest of the team is again negative. Miquel was a little nervous on the first lap on day one, so a difficult start, but then his level improved a lot. He rode much better on day two. The first two riders were ahead of all the rest, but he was fighting with the others, so a good result and overall a good performance at this first round.”