It’s quite an achievement for any new manufacturer in any form of motorsport to achieve what the Spanish TRRS brand has in its first year of production. With ten-time vice world champion Adam Raga holding the handlebars, they have competed at the very cutting edge of the sport of motorcycle trials with a very competitive machine from the word go. I was personally in the arena at Sheffield when Adam raised the roof and gave TRRS its first major international win right here in the UK in early 2016, followed by the outdoor win in Japan. As with most manufacturers the first machines produced were the 300cc models, and Trial Magazine was very privileged to be given the first test of the machine in Spain just over twelve months ago with our very experienced test rider Phil Disney. He reported back to me with the words “A job well done”. It was time for me to find out for myself what this new ‘Rising Sun’ of trials was like as I cast my leg over the 250cc model.

With seven outdoor world titles to his name Spain’s Jordi Tarres needs no introduction as the face of TRRS Motorcycles. He along with the design team in Spain started on the project at the end of 2013. In the two-year period before the three-model range was announced in September 2015 TRRS technicians and engineers worked amongst some of the best professional riders to evolve the project in the correct direction to arrive at the machine we have today for our ‘Quick Spin’ on the 250cc ‘One’ model.

Cast Your Eyes at the TRRS

It’s very impressive, from the first moment you cast your eyes over the machine. The single cylinder, liquid cooled two-stroke engine sits snugly into the forged aluminium twin spar frame. The yellow and white aesthetics give a very low, compact impression of the machine, making it very inviting to the eye. Tech branded front forks are very much the fashion these days in the trials world, and the TRRS ones set themselves apart, with the gold-coloured bottoms and dark anodised sliders looking very ‘works’ like. It’s very similar at the rear, as the R16V hydraulic shock absorber proves to be a very popular option these days. The engine features direct crankcase induction through the reed valve configuration from the carburettor. TRRS have stayed with the tried and tested carburettor method of supplying the fuel, which has easy access for tuning and maintenance. The air filter is accessed through the top of the seat, once again for ease of maintenance. The diaphragm clutch is a must for any trials machine to provide that instant ‘bite’ which allows the power to be put through the five-speed gearbox. It’s highly obvious that the design team have put many hours into the machine as quality components are visible to finish off this very modern and compact trials motorcycle.

“It looks the business’ were my first thoughts before riding this new TRRS. Its starts very easily, which always impresses me. As you would expect all the controls fall very easy to both hand and feet, requiring no adjustments for me to ride. Gear selection is very precise and for some reason it feels very ‘Japanese’ in both quality and handling. This machine was a used demonstrator and it felt very well bedded in as I played on some rocks and banks at this excellent trials venue. Everyone finds a step or a rock they particularly want to ride up or over and I am no different. To become more accustomed to the TRRS I rode it over some loose rocks before attempting my new-found step. The carburetion is as close to perfect as you could ask, and this balance combined with the machine’s handling became evident as I approached the step in first gear before moving to third as its stability became so evident. It feels well ‘planted’ and allows you to feed the power in through the very effective diaphragm clutch, which in turn feeds back the confidence to the rider. I soon felt very comfortable attacking bigger steps as the aluminium chassis gives a good neutral feel through the hands and feet. After more prompting from TRRS importer Steve Saunders I soon became very competent at attempting some pretty difficult hazards which required confidence in the machine. The whole package is very rider friendly, with the suspension and brakes working extremely well together to aid the rider over the hazards. As it’s a new brand I would imagine a few potential customers are a little wary of the TRRS but I would personally recommend you try one as you may well be as impressed as I was.”

Steve Saunders: “It is easy to see why Jordi Tarres was such a tremendous World Trial Champion as his dedication to the task is unbelievable. He is a perfectionist, and that makes working with him an absolute pleasure. You could not wish to meet more enthusiastic people than the TRRS Team of Jordi, Marc Arano and Pablo Delgado. Their desire to make the best product is amazing, which I have witnessed close up in the first year of production with very few problems with the machines. We have really only had a few fuel tank problems and this is something that has been addressed and rectified. We now have a new material that has so far proven to be very good. TRRS has finished second in the world indoor and outdoor trials championships, and with the super-human Toni Bou riding second is the best anyone else can expect! We have been very fortunate here in the UK with a good team of dealers selling the machines around the country, which has helped to promote the brand in its first year.”

TRRS UK are following and respecting the government guidelines and are still able to take and post out orders. 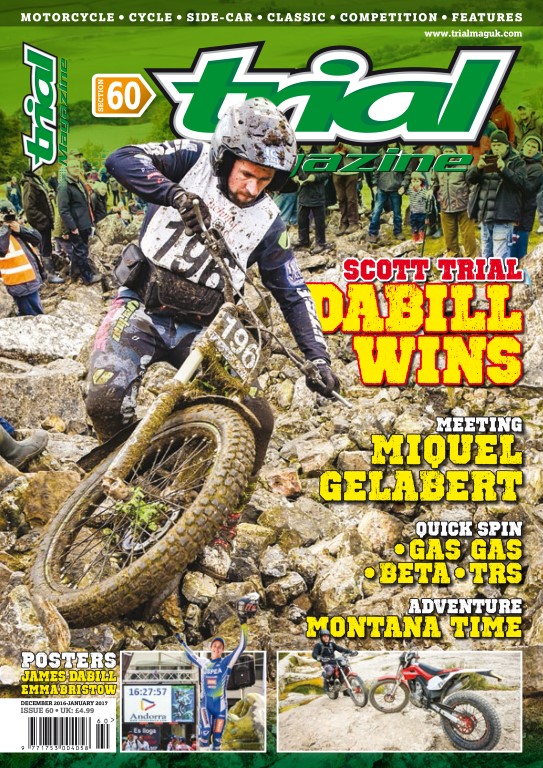 This article is taken from issue no: 60 of Trial Magazine: www.trialmaguk.com