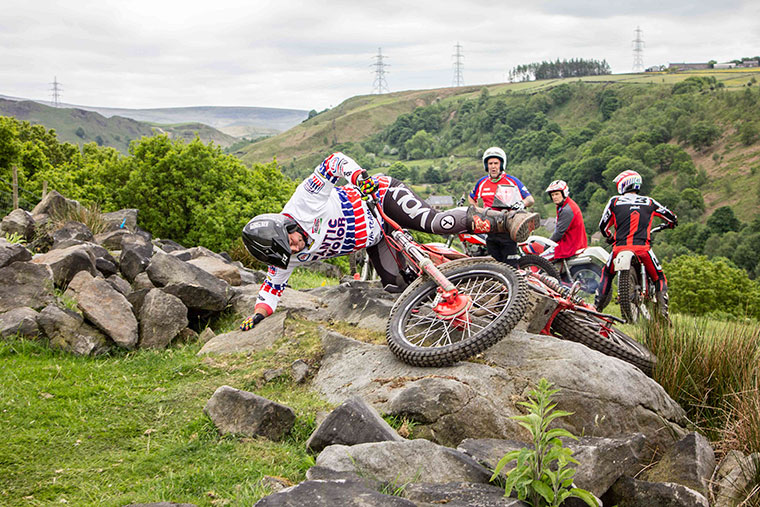 Red Rose Classic Trials club returned to Walsdon for their June trial, high on the hills near Todmorden on the Lancashire/Yorkshire border on a beautiful sunny Sunday. It was the usual format of four laps of 10 sections, with groups starting at each section to comply with Covid guidelines, but with a smaller than usual entry there were only two classes on each course – twin shocks and springers under 250.

It turned out to be a day when being old was definitely a benefit, with two of the four classes won on the oldest rider rule – there’s got to be some benefits for being old!

This decider wasn’t needed for the hard course springers, Dave Fallows taking the win by a mark from Owen Hardisty 23 to 24, with Stuart Dugdale a further 36 in arrears.

Two of the classes were won by the Alan’s, Mills on the easy course in the springers class and O’Connor on the twin-shocks hard course, the latter beating Vesty on his immaculate but squeaky Bulto with Simon Hartley in third losing out on that dreaded (for the youngsters!) age rule. Mr Mills went round clean on the easy course, as did Andrew Hesketh on his Cub, but Alan got the verdict on the age rule, and Steve Thomas’ loss of a dab on section seven dropping him to third.

The easy course twin-shocks victor was Jason Brown on the oldest rider rule from Chris Forshaw, Chris’ five on section 9 losing it for him, with Dave Broderick a further one behind on 7. Sections one and eight were the mark takers on the hard course, one was a twisty one around rocks with a steep exit made harder by the loose stones amassing on the run up, and section eight was the gully which the hard route went right to the top, and for us dabbers it seemed to go on forever! A supply of oxygen at the top would have been appreciated. The easy course riders found section five to be the hardest, a turn and climb over a jumble of rocks catching many out.

The group format still seems to work – though some still try to crack on, but it was great to ride with five guys I’d never really spoken to before though I did have my helmet taken by one and another was Mr Sagar, enough said! He didn’t get away with the five on section 9 (right in front of the photographer), and if anyone wonders why the observer’s card at section seven has a set of tyre tracks over it just ask Lee. Maybe it wasn’t such a good thing as we propped up the hard course twin-shock results! Thanks to everyone involved in the day – especially the C of C’s, secretary, treasurer and the observers for the organisation, and the Pendle Grill for bringing their butty van.

Red Rose’ next trial is the Vesterinen Trophy charity trial, to be held on the 4th July. Entries are already full in all classes, but there will be a raffle on the day – details to be published shortly. Hopefully Vesty will have oiled his squeaky Bultaco by then.