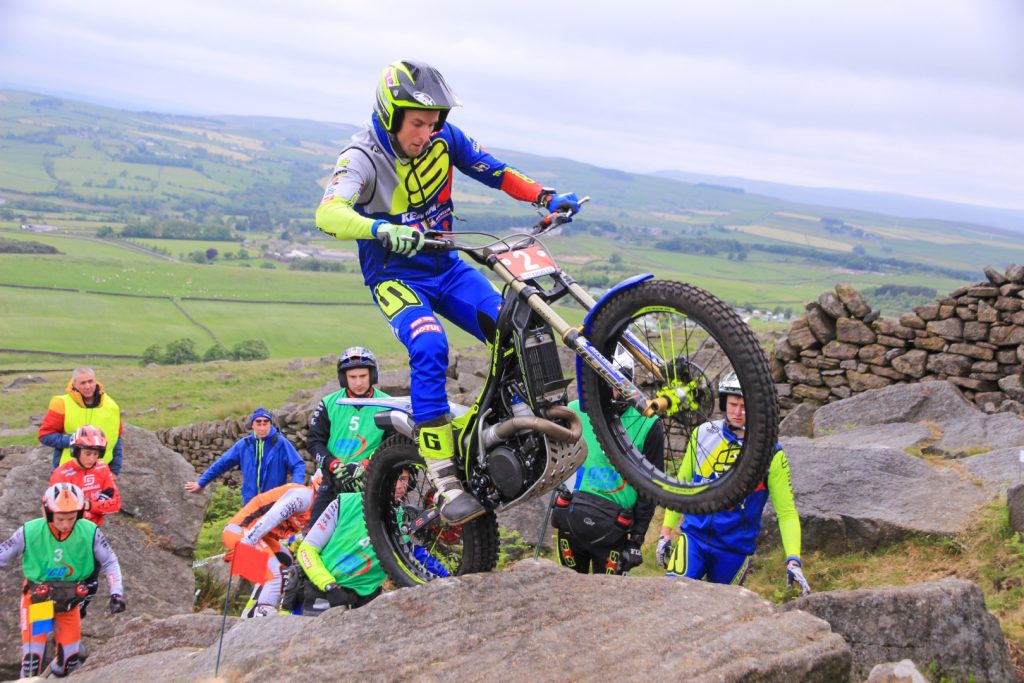 It was a very happy Jack Peace (Sherco) who further extended his lead in the ACU Trial GB British Trials Championship with his third consecutive win at round four. Toby Martyn (TRRS) pushed him all the way to finish second with Dan Peace (Sherco) third just off the pace of the top two.

The fourth round of the 2022 ACU Trial GB series stayed in the north of the country in Yorkshire and Addingham Moorside, Silsden where the Yeadon and Guiseley DMC accommodated another good entry of 63 riders entered across the Trial GB, Trial 2, Trial 125 and Expert classes. After some early overcast damp weather, the heavens opened in the early afternoon changing the nature of the exposed course. This is a very demanding venue taking in the abundance of exposed rockery to make for a challenging 12 section three lap course. Huge rocks with no room for error would push the riders to the very limits of their abilities.

The 2022 championship uses the unique ACU Trial GB marking system introduced in 2020 which includes a one-minute time allowance for each section to be traversed, competitors may stop, go sideways or reverse without penalty. However, going backwards whilst footing will incur a five-mark penalty. An additional championship point is awarded to the best performance lap of the trial to all four classes. The introduction in 2022 of the reverse order for the start positions in the main ACU Trial GB category whereby the winner from the previous round will be the first rider to start in this class continues.

Once again with the win at round three, Jack Peace (Peace) headed the entry to open the sections on the premier Trial GB course at round four. With his nearest rival, the 2021 ACU British Champion Toby Martyn (TRRS) riding behind him he watched his every move as Jack parted with some steadying marks on the opening lap. Martyn was riding at the very top of his game and his single mark loss would be the best of the competition giving him that vital extra championship point and the lead on lap one.

On the second lap the heavens opened, and the once premium grip rocks became very slippery changing the outcome of the event. As Jack Peace parted with two stops in his total of 15 for the lap, Martyn had a disaster stopping fives times in his total of 26. On the final lap they both battled for the win as the sections rode much better with more grip available and with his lap score of just seven marks to Martyn’s nine it was a very happy Jack Peace who took the win.

Jack Peace (Sherco): “I was a little nervous on the opening lap but when the heavy rain came down it totally changed the nature of the conditions. My minder Jamie Millers kept me focused and I pushed my riding to the very edge of my ability, and I moved into the lead, one I would keep to the end. When you have the best equipment in the business such as the Michelin tyres it gives you the confidence to push in all conditions, they were supreme on the very slippery rocks allowing me to concentrate on my riding and further extend my points advantage in the championship”.

The championship continues with rounds five and six later in the month in the south of country, on the 25th and 26th of June 2022.