It was a return to the North of the country for round seven of the eight round 2022 ACU Trial GB British Trials Championship hosted by the Ripon Motor Club Limited at the Rock and Hop venue at Summerbridge, near Harrogate. A large expanse of rocks and climbs in this wooded area would test the abilities of the top class, Trial GB, to the limit as Jack Peace and Toby Martyn continued the fight for the championship. Entries of just over 60 riders were entered across the Trial GB, Trial 2, Trial 125 and Expert classes who assembled for the mandatory 12 section, three lap course in the chase for championship points.

The 2022 championship uses the unique ACU Trial GB marking system introduced in 2020 which includes a one-minute time allowance for each section to be traversed, competitors may stop, go sideways or reverse without penalty. However, going backwards whilst footing will incur a five-mark penalty. An additional championship point is awarded to the best performance lap of the trial to all four classes. The introduction in 2022 of the reverse order for the start positions in the main ACU Trial GB category, whereby the winner from the previous round will be the first rider to start in this class continues.

Heavy rain greeted the riders for the start of the days action, but it had subsided once the Trial GB riders arrived at section one. Toby Martyn knew he needed the win at round seven and started very confidently by keeping his feet firmly on the footrest until section five where he took a much-needed single mark. Jack Peace had parted with an early two-mark loss on the second section as he fought to keep the championship lead, but two stops put him on the back foot as the opening lap closed with Martyn on 13 marks lost, the best of the trial, and Jack Peace on 17.

As the 12 sections bedded in after the opening lap it was Martyn, riding at the front of the entry who moved his riding level up a gear over the next two laps as Jack Peace, the younger of the two brothers, had no answer to his rival’s consistency. By the close of the last lap the winning margin had opened up to a 23 marks, such was Martyn’s solid riding. This leaves the championship still very much for the taking as Peace trails Martyn by juts a mere two points with just one round remaining as the action moves to Wales in October. 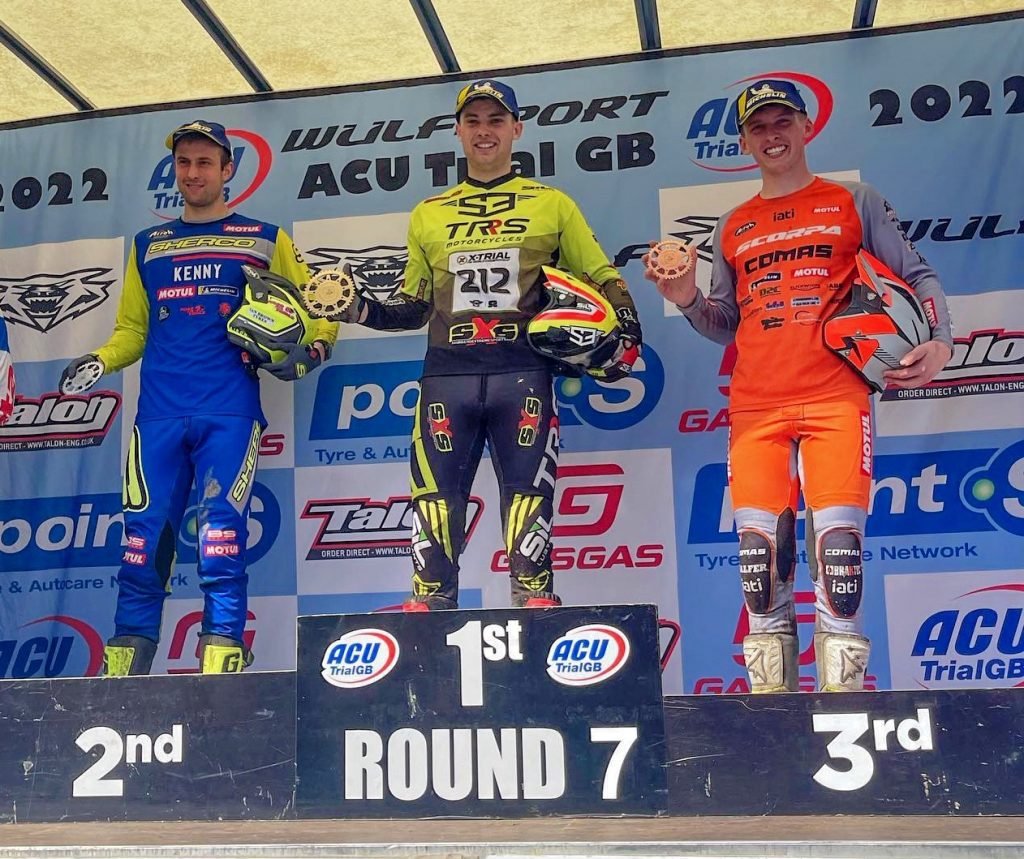 Toby Martyn (TRRS): “This has been a very well-organized event and one I have enjoyed. I expected the sections to be much harder with the very heavy rain at the start but with the recent dry weather spell they soon exposed dry grippy terrain which let me push the boundaries of my riding to the limit. The grip level changed during the day but once again the confidence in the feedback from my Michelin tyres proved a vital part in my win today. I now lead the championship, but I know I will have to be at my very best in the last round in Wales if I am to retain my ACU British title”.

The 2022 ACU British Trials Championship will conclude at round eight at Green Hall, Llanfyllin on the 2nd of October 2022.