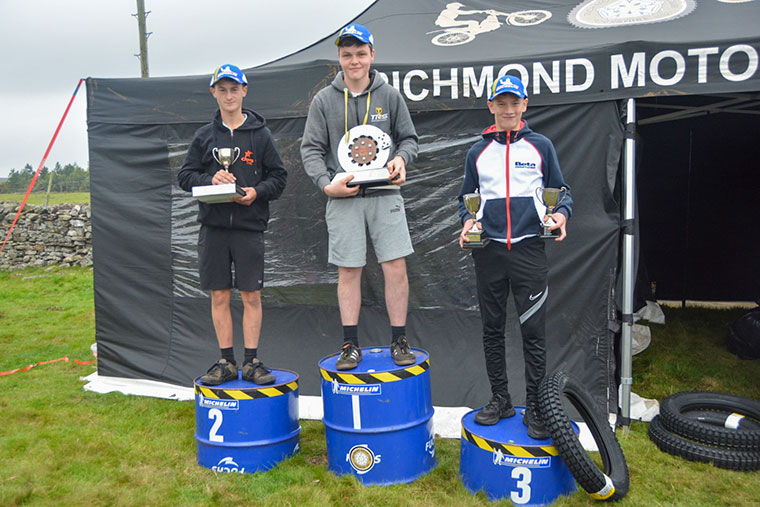 It was overcast on the Start Field in Hurst as the riders signed on and got their bikes scrutineered, but the sun came out mid-morning and the rain managed to hold off all day. This didn’t stop some riders from getting stuck in various bogs across the moors, as rainfall earlier in the week meant the ground was still fairly wet.

Before Clerk of Course Nathan Stones briefed the riders, a two-minute silence was held as a mark of respect for Her Majesty Queen Elizabeth II.

Thank you to Nathan for his hard work over the years as Clerk of Course of the trial. This year was his last, and next year Matthew Maynard will take over his position.

63 riders set off onto the course at 30-second intervals. The course consisted of 2 laps of 30 sections across some well-known Scott Trial ground. Scottish lad Jamie Galloway (TRRS) was the last rider to set off and raced ahead to be the first rider back to the Start Field, setting the Standard Time of 2 hours, 59 minutes and 30 seconds and receiving the Mintex Cup and a Michelin rear tyre kindly donated by Team Michelin.

The wet and boggy ground meant scores were high across the board, with Galloway dropping 19 after a handful of slack fives on the first lap, awarding him the NLS Contracts Trophy for the rider with the best performance on observation. This low score combined with 0 penalty marks on time meant Galloway was awarded 1st place and the Mintex Trophy as well as a Michelin rear tyre kindly donated by Team Michelin.

Next on observation was local lad Callum Fowler (Beta), who dropped 37 marks, closely followed by 13 year old Euan Sim (Beta) on 39 marks. Fowler finished in 3 hours and 10 minutes, meaning he received 11 marks on time, bringing his total to 48 marks lost and finishing in 2nd place. Sim completed the course in 3 hours, 19 minutes and 30 seconds, receiving 20 marks on time and a total of 59 marks lost, landing him in 3rd place.

Charlie Petty (Beta) was the last official finisher on time, receiving the Suffell Trophy with 162 marks on observation and 137 marks on time after finishing in 5 hours, 16 minutes and 30 seconds. Matilda Arbon (Sherco) was awarded the Harkers Coaches Trophy alongside a Michelin rear tyre kindly donated by Team Michelin for the rider showing Best Endeavor, after managing to get round the course on her first attempt, but finishing out of time.

A huge well done to all riders who came and rode the trial, and thank you to parents for all their support. Richmond Motor Club would like to say a special thanks to the landowners, farmers and gamekeepers for the use of the land. Also to the Clerk of Course and all his helpers, to marshalls, observers, sponsors, secretaries, petrol stop officials, and everybody else involved in the running of the event. Thank you to Swaledale Mountain Rescue for their continued support of the trial.

Luscombe Suzuki Trophy for the rider under 15 with the best performance on Time & Observation, together with a Michelin rear tyre kindly donated by Team Michelin: Euan Sim (Beta) 20 Time, 39 Observation; Total 59

The NLS Contracts Trophy for the rider with the best performance on Observation: Jamie Galloway (TRRS) 0 Time, 19 Observation; Total 19

The J.S. Johnson Trophy for the best performance by a girl: No Finishers

The Syl Palmer Trophy for the best performance on Time and Observation by a First Timer: Euan Sim (Beta) 20 Time, 39 Observation; Total 59