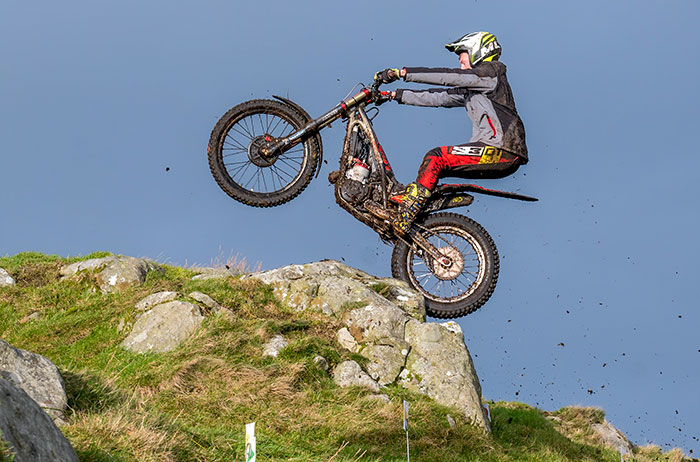 The 54th Terry Hill trial, which was held on Slieve Croob in Dromara.

Josh Hanlon joined a roster of talented riders taking first place in the elite + group. His name will be added to the list of Terry Hill Cup Winners stretching back to 1964 when Jim Lemon pipped Terry Hill himself to the post by a mere 3 points.

Times may have changed vastly since then but the Northern Irish weather has not and the 2022 trial, like in 1964 was a cold and blustery morning.

Whilst most of us lay slumbering in the warmth of our beds, a fleet of enthusiastic trials riders were preparing to take on the mighty Slieve Croob, unphased by the weather and the challenges that were sure to come with it.

A team of eagle eyed observers braced the cold without grumble or grimace, watching closely and punching score cards they held their ground as engines revved around them and riders like a herd of mountain goats clung to their steeds hoping the wind would be forgiving as they balanced and bounced, pivoting effortlessly from one wheel to the other. Rock hopping and rolling their way through rivers, across the rugged and expertly set course comprising 4 laps of 10 sections to be completed in under 5 hours.

Sixty Six adults and six junior riders suited and booted and raring to go set off with determination in their hearts and the wind at their heels.

With Dylan Smith and Mason Crawford heading up the junior categories.

Those men, women and even entire families of rosy-cheeked riders who took part in the event emerged from the final markers splattered in mud, weather beaten and worn. The smiles on their faces spoke volumes, it was clear that even those who did not win were victorious in their own glorious battle with Slieve Croob.

A fantastic day in Northern Irish Trials Biking with a tremendous turn out of talented riders who made the day. Another great success for the Temple Motorcycle and Athletic Club, and an exceptional turn out for their centenary year.

The Temple Motorcycle & Athletic Club would like to extend their thanks to the Herron family. Also John Heenan, Eddie Henderson, Nigel Mobray, David Gault for course setup and to all the observers without whom, there would be no event.