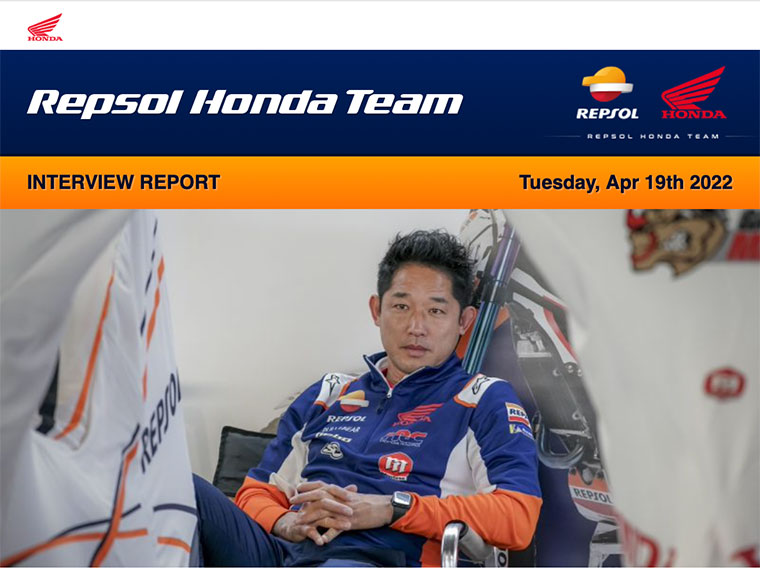 Takahisa Fujinami: “There is not a lot you can teach a 30-time world champion”

Takahisa Fujinami is now four months into his role as Team Manager at the Repsol Honda Team, after a lengthy, successful career as a rider. We caught up with him during the first break of the season to talk about the new position in a team that includes both the world champion and the most promising rider in the paddock.

Fujinami has made his debut in a team he knows far better as a rider than as Team Manager. Now occupying the post, amid plenty of new developments, Takahisa Fujinami feels satisfied with the season start, with the team currently leading the X-Trial World Championship and with a Bou-Marcelli one-two in Madrid.

– How have these four months been in your new role after hanging up your boots as a rider?
– Actually, I already understood just how the team works. After twenty-five years here, I think I know it pretty well. We also know the way the championships work, the training needed, what the riders think… All this is knowledge that we already had, but for me what is new is the organisation of the whole team and the logistics, particularly. We have to establish contact with the federations, with the promoters of the championships, with the sponsors… All this is still new to me, but little by little we are adapting to it.

– The first championship of the season, X-Trial, is already underway. What is your assessment after the first four events?
– We already knew that Toni Bou would be very strong, but what we didn’t know was how his performance with the new bike and its larger engine would be. I was riding it last season, during the pre-season we make it better and the result has been great: Toni has won every one of the four trials so far and only dropped one lap out of eight. We also found out that Gabriel has the level to be up there, as he showed in Madrid. In the first event his nerves got the better of him and in Barcelona he narrowly missed out on the second round. He still has a lot to learn. I will try to teach him as much as I can. So far the performance of the two team riders in X-Trial has been really good.

– As a former rider, would it be fair to say that perhaps the advice you give to Gabriel Marcelli is more important than to Toni Bou?
– What can you teach a 30-time world champion? Very, very little to be honest. But I can help Gabriel. He wants to improve to become a future world champion. With 26 years of experience in the world championship, I think I can teach him how to learn to concentrate mentally to tackle the events. He has the technique, now he just needs to improve a bit in certain aspects.

– You mentioned a technical aspect about the evolution of the bike. You have ridden with the new engine that Toni and Gabriel are now using. Is the Montesa still evolving?
– The main thing is that we still have to compete against the two-strokes. They have some advantages over 4-strokes and so we have to keep evolving to be able to compete on a certain technical level.

– The first championship of the season is X-Trial, with some changes in the rules. What’s your opinion about that?
– What we don’t agree with is the selection of the riders. I don’t think anyone understands it because Gabriel Marcelli was sidelined from the opening event after being second last year in Barcelona and finishing fourth in X-Trial in 2021. Other than that, it’s more or less the same as it was last year.

– The next event to be contested is the start of the Spanish Trial Championship (CET) in Arteixo, where Marcelli will be taking part. Last year he won his first trial in the top category and finished third. What do you expect from him in the National?
– Last year I went with him to the final two trials to see what the Spanish Championship was like and Gabriel won one and was third in the other. The CET is quite different from the Indoor and Outdoor World Championships. It’s mentally challenging as well as physically, with more sections and more race time. We hope that this year he will be in the battle to be Spanish champion as he has a high enough level.

– In a little over a month the TrialGP World Championship gets underway in Spain. What are you planning for the team in the Outdoor World Championship?
– Toni is going to defend the title, that’s for sure. And we hope that Gabriel can achieve his goal of finishing in the top three and if he can win one of the events, even better! A one-two would be fantastic!

– The World Championship event in Japan was cancelled in the end, but the Spanish GP has been added in its place. What do you think of the 2022 TrialGP calendar?
– Almost all the competitions in this year’s calendar will be double-date events, which means they will be very physical and you will have to be very fit because there will be two competitions in August and it will probably be very hot. It will be a bit different. Normally Japan was in the calendar, but because of COVID, we weren’t able to go, but the race in Spain was also missing. Finally we will start the World Championship in Spain, which we are very pleased about. We will have one or two trials every month and that means we will have to be very focused and physically well-prepared.

– As a Japanese national, how do you feel about there not being a Japanese GP? You were the main attraction for the fans in Motegi. Who’s going to fill Motegi next year?
– Yes, it’s a pity that for the last three years we weren’t able to compete in Motegi. And for me, having retired from competitions, not being able to do it in front of my home crowd is a thorn in my side. I hope to be able to do it as a manager and I hope that the Japanese riders will continue to compete as well. Also, don’t forget that we are at the home of Honda and it is always an honour to be able to go and compete there.