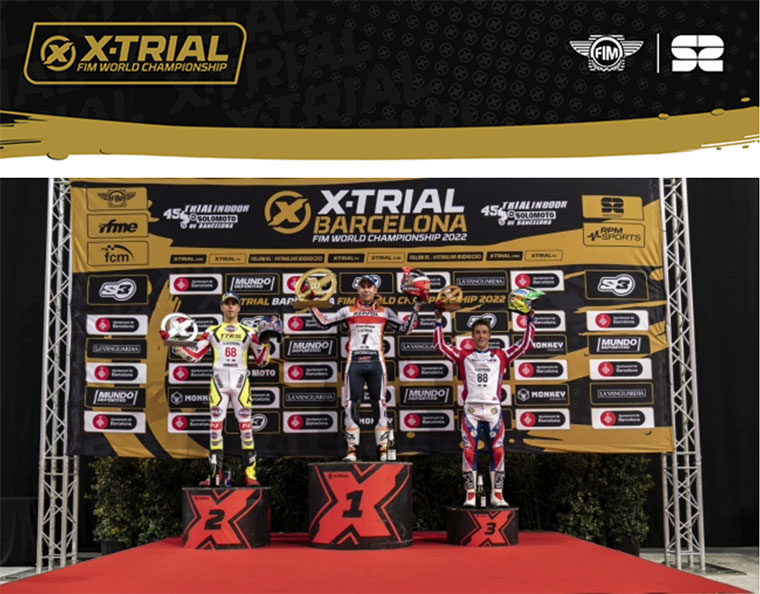 Toni Bou (Repsol Honda Trial Team) claimed his fourth victory of the 2022 X-Trial World Championship.  Returning to the venue where he secured his fifteenth world title back in November, Bou picked up the maximum available 22 Championship points to extend his lead over main rival Adam Raga (TRRS) to a mammoth 30 overall.  Raga again pushed Bou hard throughout the night, finishing tied with the reigning title-holder in Round One, before losing out by three marks in the second Round and four marks in the Final.  Section Four proved the difference between the two, Raga suffering a fiasco while Bou took just a single mark to pull clear.

Matteo Grattarola (Beta) made his return to the podium for the first time since the season-opening X-Trial Nice, consolidating his provisional bronze-medal ranking.  His main series rival Jaime Busto (Vertigo) finished just three marks short of qualification to the Final and therefore slips eight points behind Grattarola overall.

Behind the Championship’s top four, Benoit Bincaz (Gas Gas) and Sondre Haga (Beta) were separated by just a single mark over fifth and sixth.   Meanwhile it was a disappointing night for Gabriel Marcelli (Repsol Honda Trial Team) who was relegated to seventh just a week on from a second place finish at X-Trial Madrid.  And Toby Martyn (TRRS) made an unsuccessful return to the World Championship after a week away on national duty.

Toni Bou (1st): “I am really happy with today’s win and for the four I have now in the Championship, because of my feeling and because winning in Barcelona is always very special.  The spectators really enjoyed themselves and we fought right to the last Section.  I started the Final well but I made a mistake in Section Three and Adam rode it perfectly to take the lead.  I was pleased to recover in Section Four and having to beat a rival like him makes sure that these races are more exciting”.

Adam Raga (2nd): “It was very close in the first Round, I was very close to the win.  I was also competitive in the second Round and in the Final until the last Section.  I wasn’t far away from the win; I made a mistake in Section One, it was a very difficult step I couldn’t make.  But I am happy with my riding and performance”.

Matteo Grattarola (3rd): “I am delighted because I wasn’t expecting this third position here in Barcelona.  It’s a special gift to get on the podium here, where I have never managed it before, and this has really motivated me for the remaining Rounds and to improve my results”. 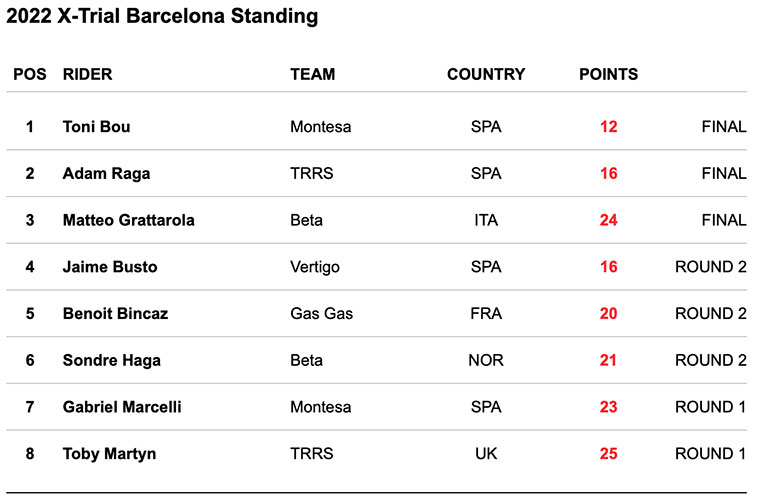