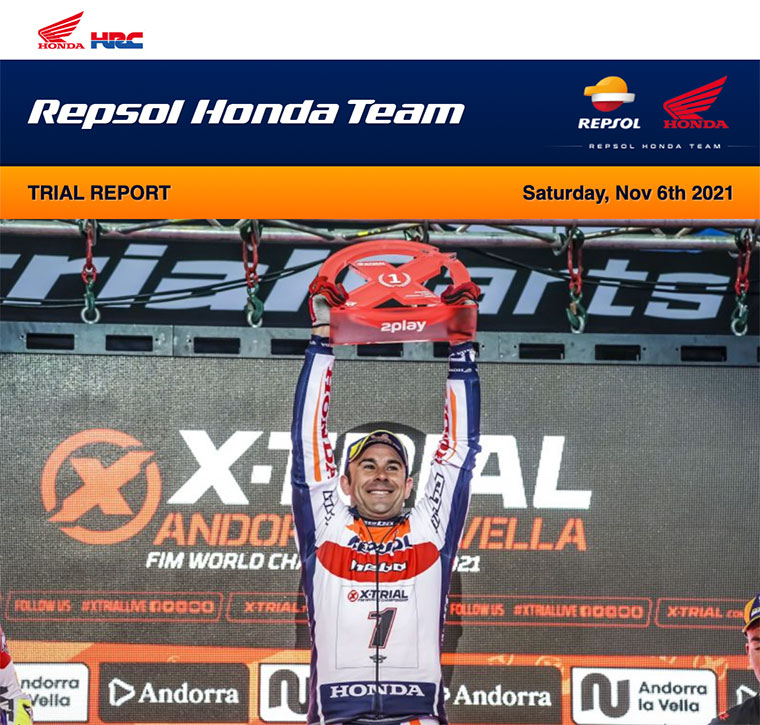 Toni Bou kicked off the 2021 X-Trial season with a rip-roaring triumph at the Poliesportiu de Andorra in Andorra la Vella to become the first leader of the 2021 championship.

The action got underway with the first qualifying round, where riders had to overcome a total of six sections with Toni Bou making several mistakes to finish fourth on seven penalty marks. In the second round, where just the top riders in each group would make the cut for the final, the Repsol Honda Team rider stormed back, delighting the Andorran spectators with a fine display of riding skills, finishing the round with a clean sheet to grant the champion direct access to the final round.

In the final, against one of his toughest rivals Adam Raga, Toni Bou once again pulled it off, cleaning all six sections for 0 points compared to Raga’s 11, thus sealing the win at the Andorrean season opener.

I’m very happy with this victory. After 20 months without participating in X-Trial the sensations were strange today. To be back competing in front of the fans and, on top of that with an Andorran crowd that was incredible. We know that Barcelona – which is also my home trial – will be very tough and that’s why it was so important to win here today. At the start, I managed to pick up some points and I made some mistakes. But on both the second lap and the final one, things went spectacularly, not only because I didn’t pick up any marks, but also because I was feeling very comfortable with my riding and felt confident and aggressive. I am very pleased with my riding, but above all with the team. I want to thank them for all the work they have done this last month after winning the outdoor world championship, to get the bike ready for the indoor championship.

Today Toni had one of his usual trials. At the start it wasn’t easy, but he gave it 100% and rode a great trial. It’s great to win here, but we know that we have it all to play for in Barcelona. It’s a very short championship, which it shouldn’t be, but we’ll just have to grin and bear it. Thank you very much to the whole team for all the work and see you all in Barcelona.

Jaime Busto makes it to the podium in Andorra