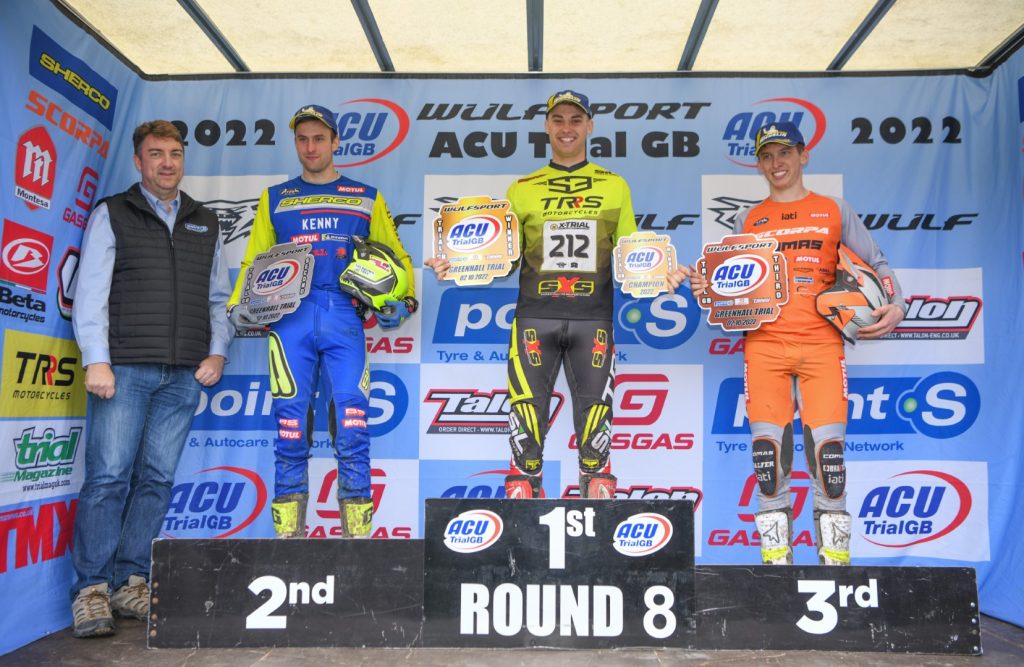 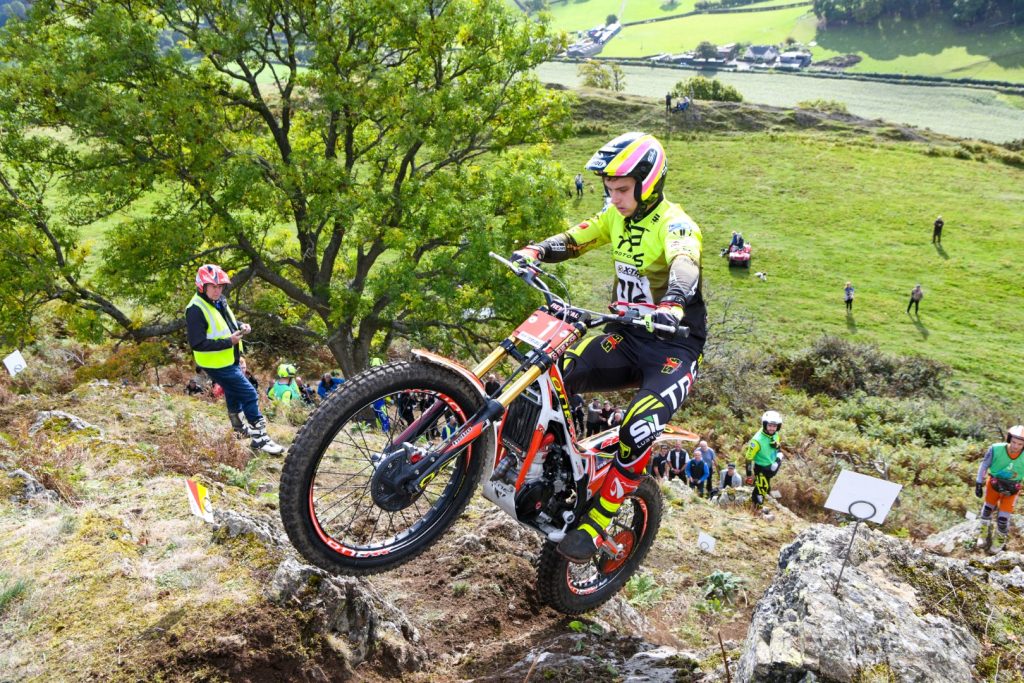 Round eight, the final and concluding round of the 2022 ACU Trial GB British Trials Championship moved to Green Hall, Llanfyllin in Wales. A large off-road five Kilometer course with a wide variety of sections including rocks and steep wooded climbs was laid out to test the abilities of the top class, Trial GB, to the limit and find an eventual winner in the fight for the championship. Entries of just over 60 riders were entered across the Trial GB, Trial 2, Trial 125 and Expert classes who assembled for the mandatory 12 section, three lap course in the chase for the final championship points.

The 2022 championship uses the unique ACU Trial GB marking system introduced in 2020 which includes a one-minute time allowance for each section to be traversed, competitors may stop, go sideways or reverse without penalty. However, going backwards whilst footing will incur a five-mark penalty. An additional championship point is awarded to the best performance lap of the trial to all four classes. The introduction in 2022 was of the reverse order for the start positions in the main ACU Trial GB category, whereby the winner from the previous round will be the first rider to start in this class continues.

Despite a cold night and an overcast start to the day the sun eventually shone through the clouds to provide ideal trials riding conditions for the series finale. As the action started it was a case of the winner takes all between Toby Martyn, the championship leader and Jack Peace as they were separated by just two points. Both of them parted with single mark losses in the early sections as they arrived at the imposing section four on the ragged rock outcrop. As it happened it proved impossible as no one passed though the ends card over the three laps. They both stopped in the final section and the scores came in with Martyn holding a slight two-mark advantage over Jack Peace in the totals of 14 and 16 marks lost.

On the second lap the action was just as close as they both parted with ten marks each leaving the championship victory still in sight for both of them. It was all to play for on the third and final lap with Martyn riding the sections in front of his rival. The first to buckle was Jack as he stopped in section two, then on the steep wooded roots of section eight Martyn had a one and Jack a two. In a dramatic climax to the end of the trial Martyn stopped in the last section of the day thinking he had lost the title. It was a very tense wait as Jack Peace handed his score card in and with a final lap score of 12 marks lost the championship would remain with a jubilant Toby Martyn.

Toby Martyn (TRRS): “I am absolutely delighted with the win at the final round as it was not the easiest of days. I was riding the sections first and they were very tricky, I knew all day that the loss of any marks would be difficult to pull back. The nerves did affect me a little as Jack was also riding well, this was proved with the opening two lap scores which were very close. My head dropped when I stopped in the final section of the day, thinking at that moment I had just lost the championship, but as it turned out my hard work was rewarded with the win and the title”

“When the riding conditions are difficult and the pressure to succeed is on you, having the best equipment is a key factor in your riding ability and without a doubt the all-round capabilities of the Michelin tyres was a vital factor in bringing home the 2022 ACU British Trials Championship. I would like to thank all the organizers and the officials and observers for all their hard work, I have had fantastic support all season and I would like to thank everyone who has contibuted to my latest success, thank you”. 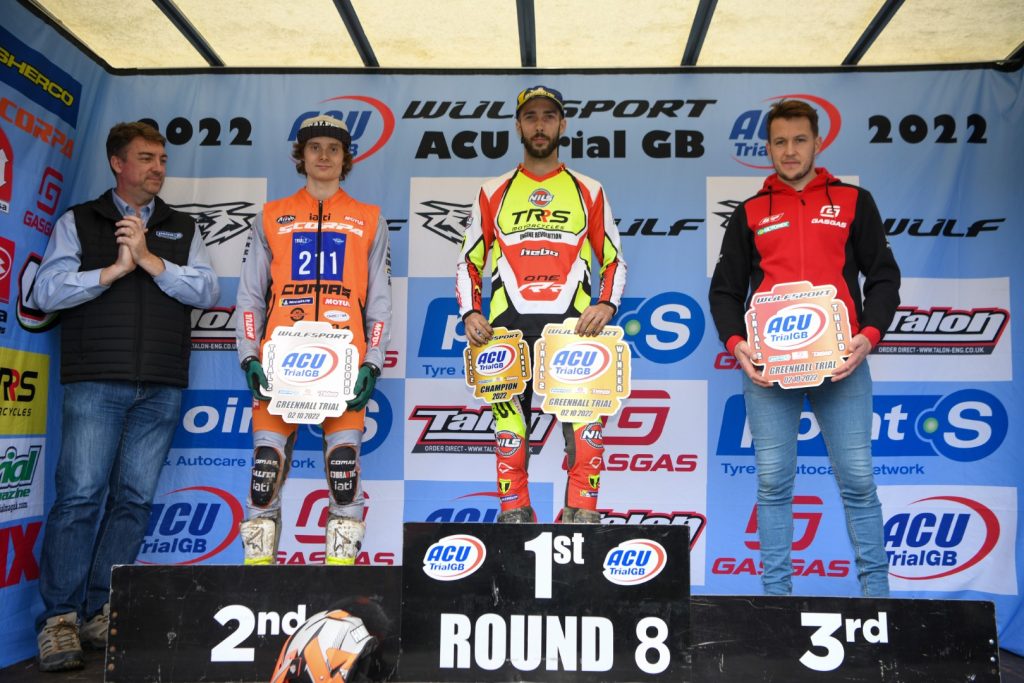 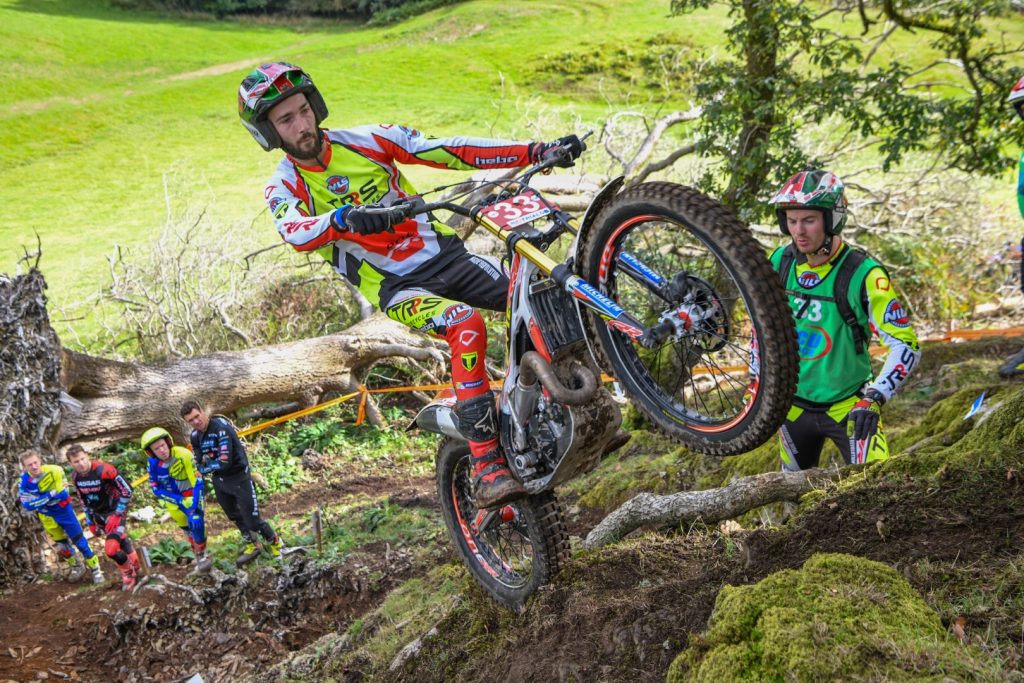 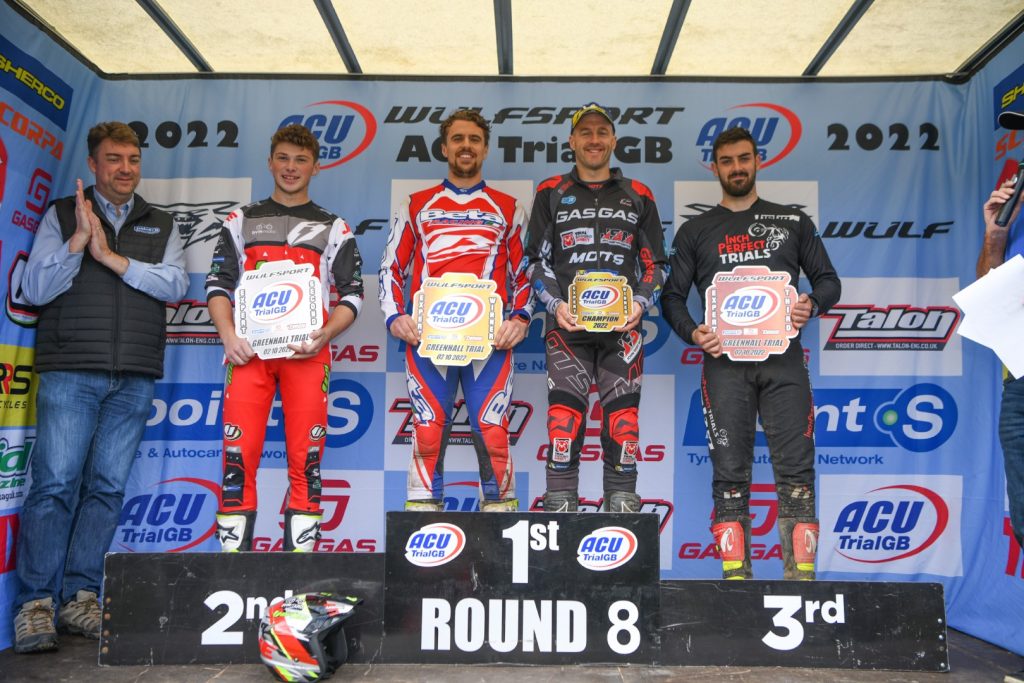 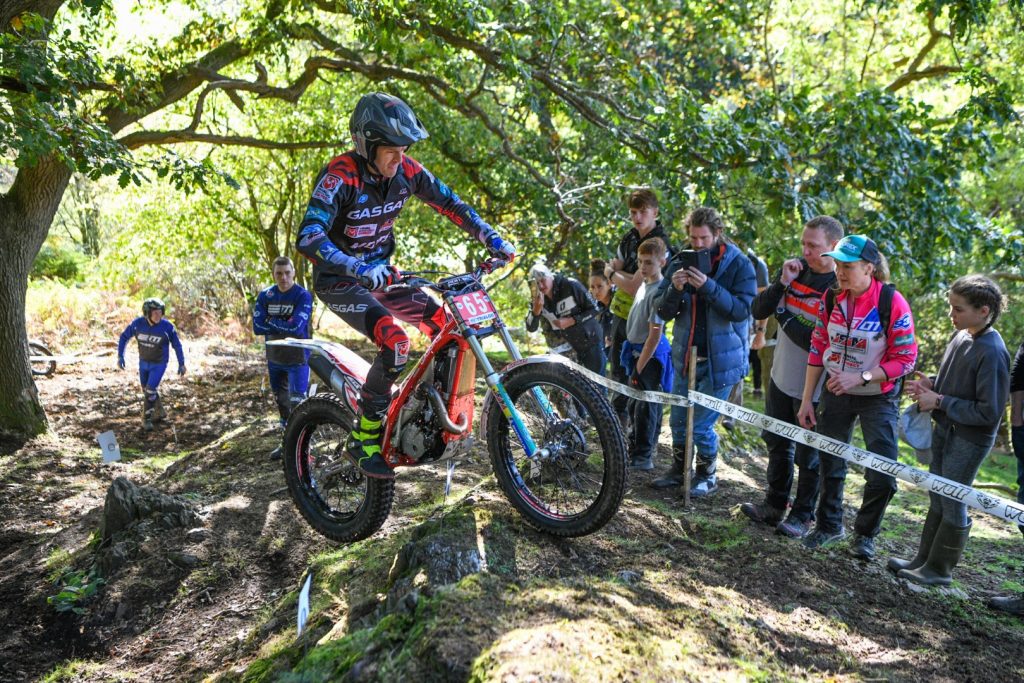 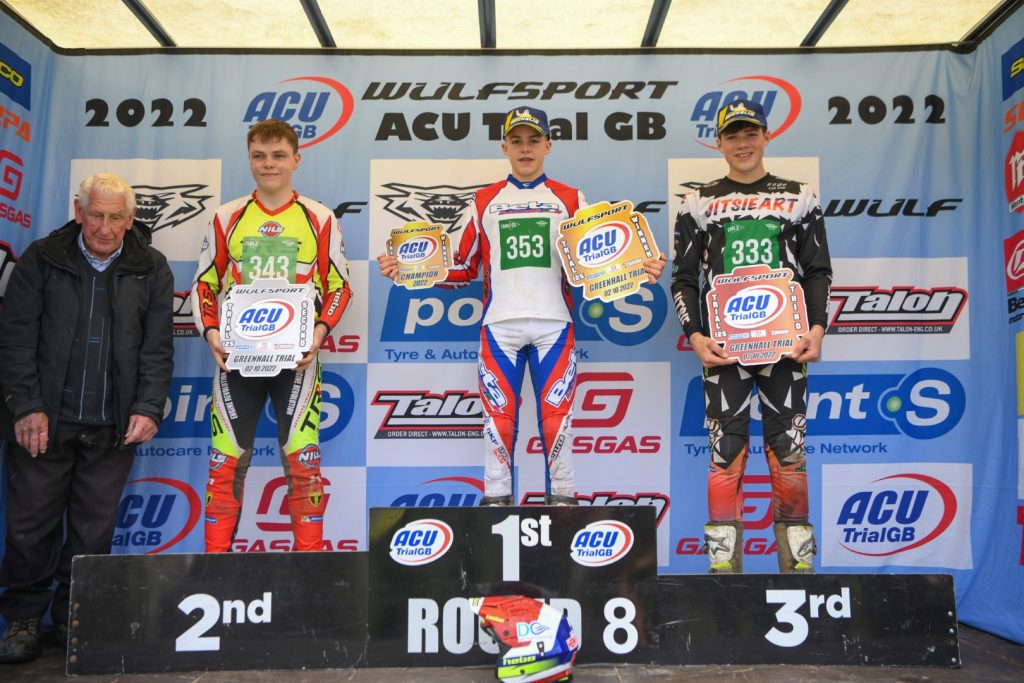 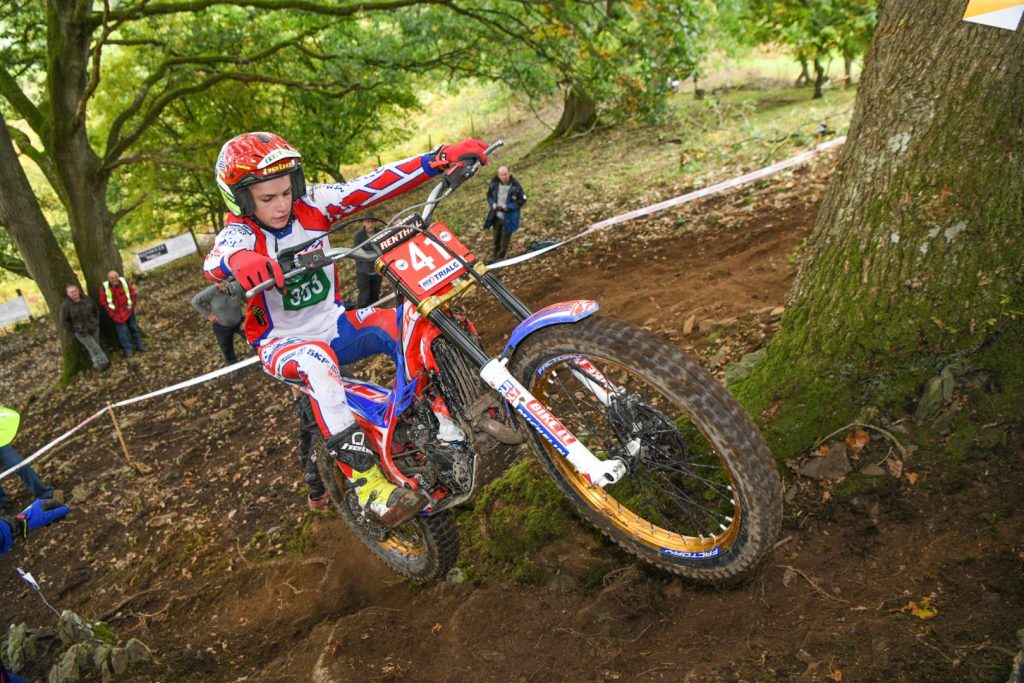