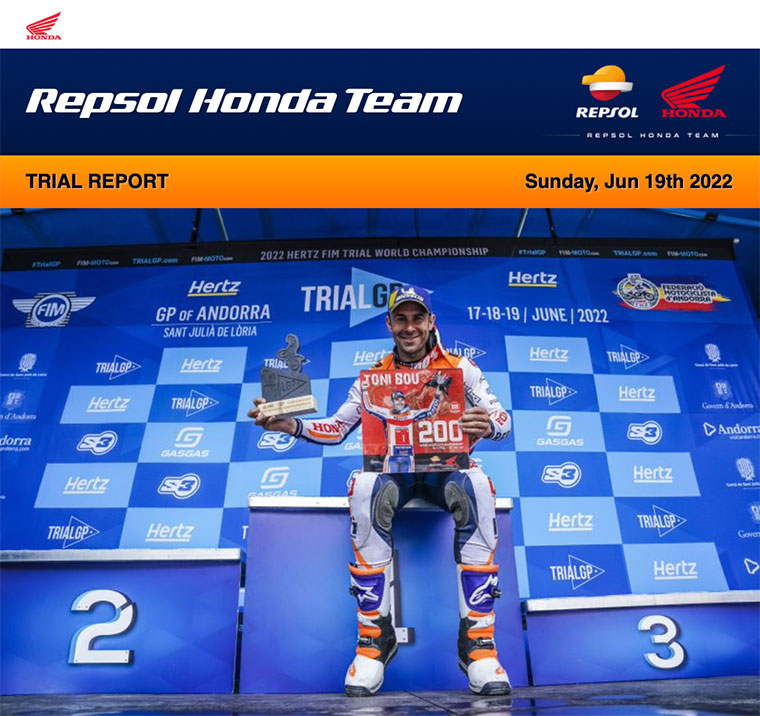 Toni Bou’s track record continues to go from strength to strength, while the desire to keep adding further honours remains as intact as ever. With today’s triumph, the Repsol Honda Trial Team rider becomes the first and only rider to ever reach 200 Trial World Championship victories, accumulating a tally of 127 TrialGP wins and 73 X-Trial wins since debuting in 2003. On day two of the Andorra TrialGP, an improved Bou came out guns blazing, rectifying the errors that had let yesterday’s win slip away, to finish top on both laps one and two. In the general standings, Repsol Honda Trial Team’s Catalan rider now holds the TrialGP World Championship lead, 11 points clear of the nearest second-placed rider.

The second day of the TrialGP World Championship proved a less positive one for Gabriel Marcelli, at least in terms of the final result. Due to the very evenly-matched participants this season, the Galician rider of the Repsol Honda Trial Team finished the day in seventh position, although committing fewer errors than yesterday and displaying better riding prowess. Today’s fine result sees Marcelli in seventh place in the overall world championship rankings.

The TrialGP World Championship takes two weeks off before returning on the weekend of 8-10 July for a new double-header in Neunkirchen (Germany).

I’m very happy with how the day went. Yesterday was a tough trial but today was too and we have been able to snatch a very important win towards the championship. In addition, achieving my 200th world championship win here in Andorra, including indoor and outdoor, makes it all the more thrilling. We have to be realistic – taking a first and a second position in a world championship weekend is positive, as it was in l’Hospitalet de l’Infant. I think my numbers are very good: we are not used to finishing second, but when we do it feels like a disaster, which it isn’t. I always say that it’s important to keep your feet on the ground, because coming here level on points and coming away from Andorra 11 points ahead of the runner-up is very positive. I would have liked to have won yesterday, but realistically, I made some mistakes, as we did today, but we managed to overcome them, so I’m pleased with the weekend.

On the first lap I didn’t ride as well as I could have ridden. I made too many mistakes and I notched up a lot of marks. Fortunately, on the second lap I rode much better and I was myself again, but the other riders also rode very well and closed the gap. Although I felt good on the bike, when I got to the paddock and saw the results I realised that I hadn’t been able to gain as many positions as I had hoped. This year there is a lot of rivalry, all the riders are very strong and we’ll have to give it more gas next time.

We are very happy with Toni Bou’s riding today. On the first lap he made two mistakes in sections 4 and 12. Despite these errors, Toni’s performance today was really good, showing his true riding and it also helped us to put yesterday’s trial behind us. I wish to congratulate Toni Bou for his 200 world championship wins, in both indoor and outdoor. I hope he continues to be successful and we will always be there to try to offer him the maximum support possible. As for Gabri, he was also very good today. In fact, he was the only rider who managed to get through zone 4 without fiving it on the second lap. He has a lot of potential, but we have to work harder to try to make fewer mistakes during the trial, as there are points where he shouldn’t fail and he ends up failing. Now there is a two-week break and we will work to prepare better mentally for the coming trials.