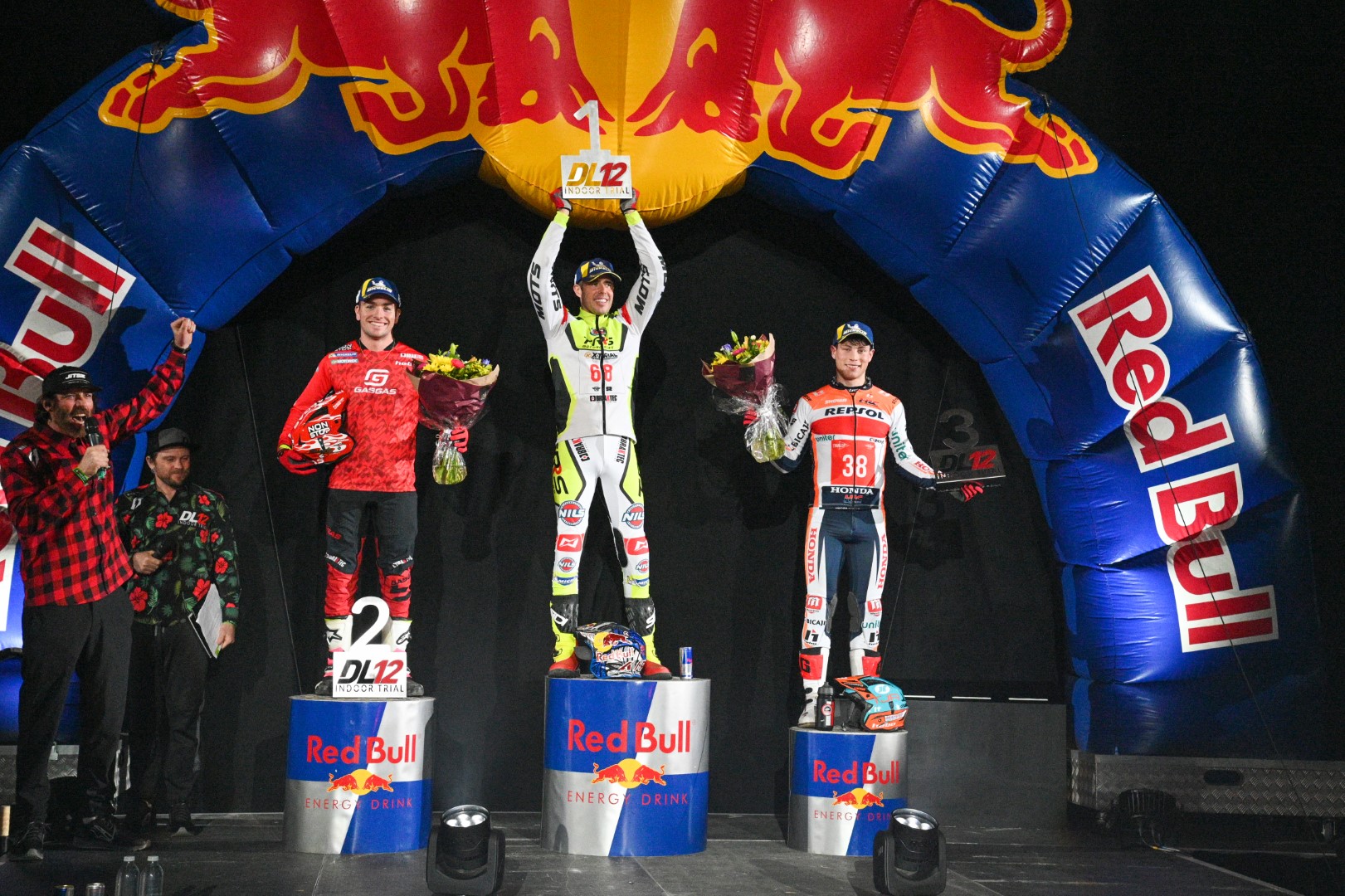 It was a welcome return to the ‘Steel City’ of Sheffield, Great Britain for the inaugural DL12 Indoor Trial 2023 on Saturday, January the 7th. The giveaway in the DL12 title is the 12 x FIM World Trials Champion Dougie Lampkin MBE who took the bold move to bring the best of the world trials talent for this invitation only stadium event. Headlining would be the 32 x FIM Trial World Champion Toni Bou (Repsol Honda-ESP) and for the first time at an indoor event two other FIM Trial World Champions from 2022, Trial2 Sondre Haga from Norway and from Trial3 Great Britain’s Harry Hemingway would join him along with six other riders. 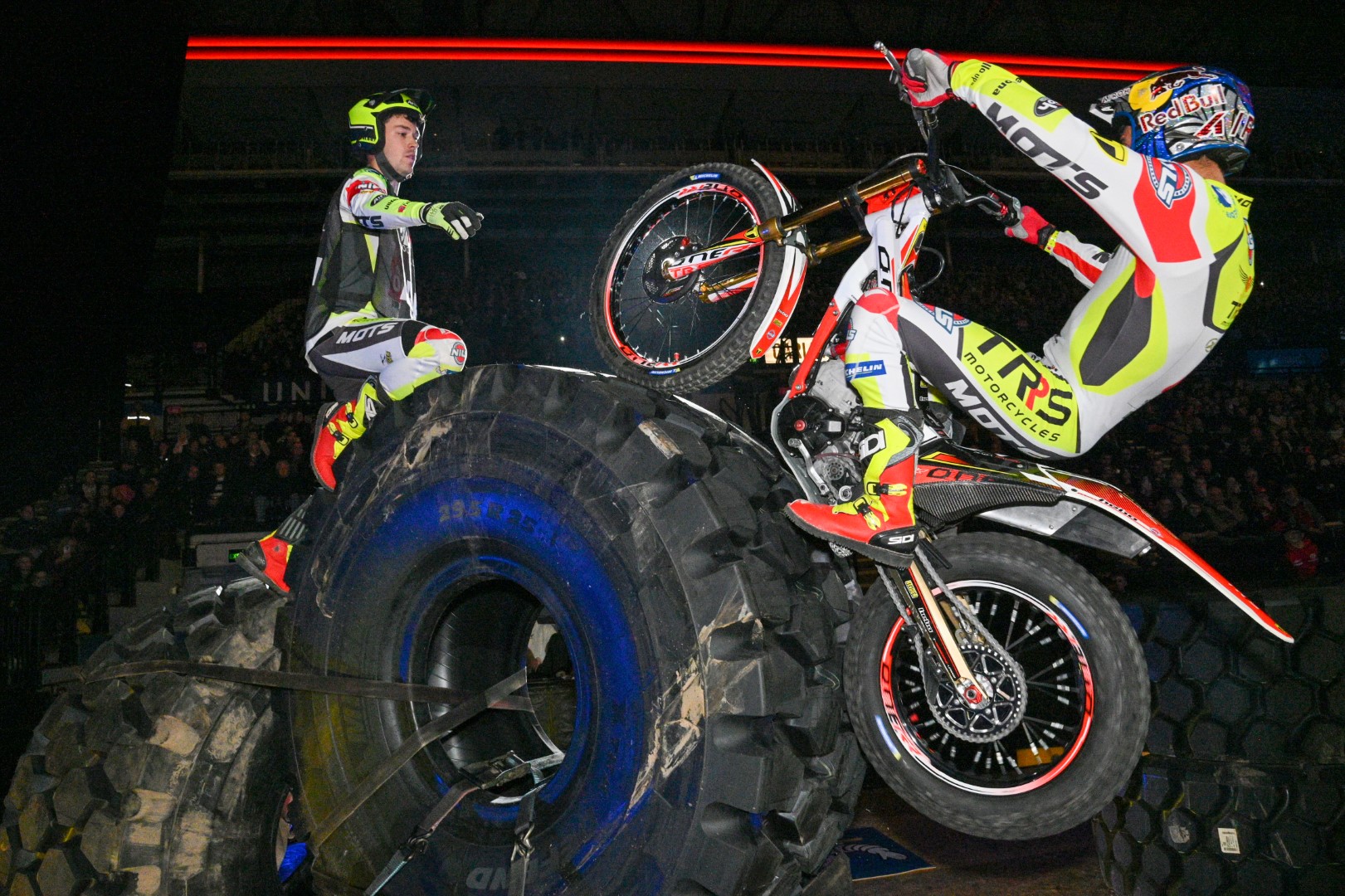 A sell-out crowd of 4,000 motorcycle trials fans came to the easy to access Utilita Arena Sheffield to witness the event which would be contested by nine riders who would compete over an easy to follow format of six man-made sections, two races with the four best riders proceeding to the final where the scores would be returned to zero. In the final the four riders would compete over six sections ridden in the reverse direction finishing with races with the eventual winner being crowned the first ever DL12 Indoor winner.

With the crowd seated and excited it was action from the word go as Great Britain’s Jack Peace opened the action in the qualifying section to determine the start positions for the first attempt at the six sections. The action came quick and fast as the sections proved almost impassable at times until one by one the passage though them became more obvious to the rest of the riders. Two big crashes in the qualifying would eventually rule out Toni Bou (Repsol Honda-ESP) for the final as Jaime Busto (GASGAS-ESP) pushed him down into second with Gabriel Marchelli (Repsol Honda-ESP) third and Adam Raga (TRRS-ESP) fourth.

In the four man final it was Toby Martyn (Honda Montesa-GBR) who benefitted by from Bou’s withdrawal and he was the first rider to attempt the sections in the reverse direction. As the riders passed through the first four sections it was still very tight in the fight for the victory between the top three who had edged away from Martyn. As Raga was riding in front of Busto he attempted the sections first, as all the riders emerged from the huge rubber tyres in the Michelin sponsored section it was Raga with the advantage and he held his nerve in the last section to take the singe mark win over Busto.

Adam Raga (TRRS-ESP): “What an exciting start to the trials season and one I am very happy to take the win in showing the younger riders that I am still very competitive. Anything can happen at the indoors and this is where you need every advantage to give you that winning edge. On the wide variety of man made hazards the Michelin tyres once again proved their superb attributes of providing wheel grip in the most extreme of conditions to give me the win at the first DL12 Indoor event”.