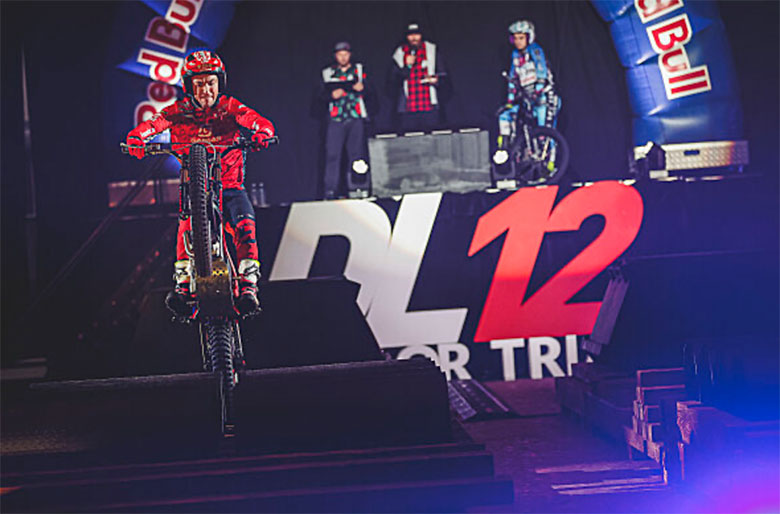 Agonizingly close to winning on his first ever competitive outing as a GASGAS Factory Racing rider, Jaime Busto secured a highly impressive second-place result last night at the DL12 Indoor Trial in Sheffield, England. Starting the new season as he means to go on, Jaime placed just one point from the top step of the podium in the finals having topped the qualifying heats earlier in the night. Although not making the night’s finals, Sondre Haga showed some impressive form on his GASGAS debut.

Jaime Busto: “I’m super happy with everything tonight. The first competition for me and the team and we were so, so close to winning. My riding was really good all night, but I made one big mistake in the speed race in the finals and that cost me the win. But even though the win was so, so close, it was a very positive night. The team has worked so much, and I’ve been training a lot, and I felt great on the bike. That is the most important thing for me. I was very nervous at the start of qualifying and had a five in the first section. Things got better section by section and, well, I feel very good with the bike and with some more training I know we will be ready for the first indoor world championship round in one month.”

Entertaining the crowd with his awesome, committed riding, Busto breezed his way through the qualifying heats, despite a frustrating five in the very first section. Finishing three points clear of second-best qualifier Toni Bou, Busto was feeling good and ready for the finals.

With all sections ridden in the reverse direction in the finals, Busto was the only rider to complete the opening section, dancing his way through the demanding log challenge. With his confidence high, an unfortunate five in section two meant things were tight at the top. And with all of the top three making it through section three with just one mark lost, Busto then matched his rivals in section four.

Frustratingly for Busto, a super-impressive night’s riding was somewhat undone by a mistake in one of the head-to-head races, which saw him drop five important marks. Continuing to ride well and the only rider to make it through the unforgiving tire section cleanly, Busto ended the night just one point behind eventual winner Adam Raga.

For Busto’s teammate Sondre Haga, the DL12 Indoor Trial turned out to be a challenging but enjoyable event. Super nervous before the start, the reigning Trial2 World Champion saw a small mistake in the opening speed qualifying section have a big impact on his night. Caught out by a matrix-style wooden section, the resulting lost time meant he was then the very first rider to tackle the night’s never-before-ridden sections – something that no rider really wants to do!

Despite his obvious handicap, Sondre battled on the best he could, overcoming an early five to show some impressive style, including a clean in section three. Collecting 22 points for his six-section qualifying run, the tall Norwegian finished just three points away from qualifying for the finals.

Sondre Haga: “I’ve really enjoyed the DL12 Indoor Trial and it’s been great to be together with the team and to get back into competition. The night didn’t start in the best way for me as I made a costly mistake early on in the first qualifying race. That meant I was the first rider into all the sections, which is never where you want to be. But I felt like I was riding well, some mistakes, but also a lot that I am happy about. I felt really confident on the bike, which is the most important thing for me, so all-in-all I’m pleased with things and really enjoyed the trial.”