A brand new venue for the second Round of the season 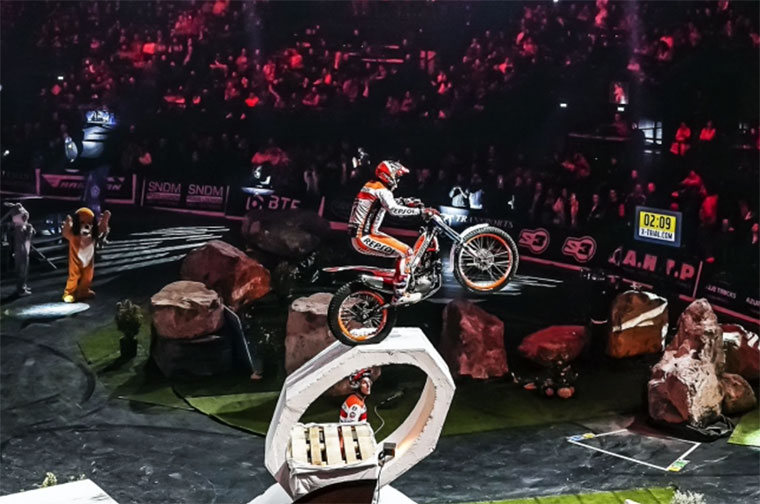 The city of Chalon-Sur-Saône in the French département of Saône-et-Loire hosts the X-Trial World Championship for the first time on 25th March 2022.  The series’ new promoter Esdeux, with the support of the Moto Club Demigny Sports Mécaniques, brings the second Round of the season to Le Colisée, a venue familiar to fans of French basketball.

Toni Bou (Repsol Honda Trial Team) arrives as the Championship leader with 22 points, comprising 20 for victory at the season curtain raiser plus both available bonus points for topping the standings in the opening two phases of competition.

Among Bou’s six closest rivals are the other two podium finishers from X-Trial Nice a fortnight ago, Adam Raga (TRRS) and Matteo Grattarola (Beta).  Italy’s Grattarola is fresh from the first X-Trial podium of his career and a Grand Final in which he fought veteran Raga all the way to the last section.

Also in the line-up of permanent competitors for the 2022 season are young guns Jaime Busto (Vertigo) and Benoit Bincaz (Gas Gas), the Frenchman hoping to take his first podium since the introduction of a new competition format this campaign.  Toby Martyn (TRRS) and Sondre Haga (Beta) will be among those chasing the top six positions in the preliminary phase of competition, with only the lead trio on cumulative points after two Rounds making it through to the night’s Final.

Young Spaniard Gabriel Marcelli makes his debut for the Repsol Honda Trial Team as the event Wild Card at X-Trial Chalon-Sur-Saône.  He marks a swift return to the Championship after an excellent second place at X-Trial Barcelona in November that saw him finish fourth overall last year.

X-Trial Chalon-Sur-Saône gets underway at 20:30 local time and can be followed live at www.x-trial.tv .