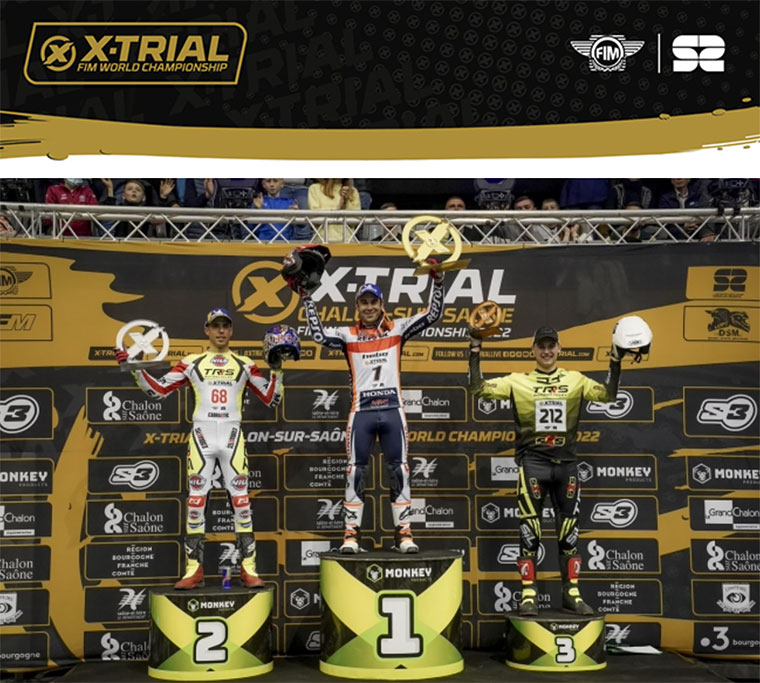 Fans in the Colisée were treated to a night of high drama in the inaugural X-Trial Chalon-sur-Saône, as Toni Bou (Repsol Honda Trial Team) claimed victory over his closest rival Adam Raga (TRRS) by just a single mark.

Just as in Nice two weeks ago, the X-Trial was settled in the penultimate section, with Raga suffering his only fiasco of the Final, before Bou held his nerve to claim a second consecutive win with which he opens his title defence.  Bou’s surprise failure in Section Six meant that just a single mark separated him across the night from Raga, with whom he tied in each of the opening two runs.  It was a landmark evening for Raga, as he matched Takahisa Fujinami’s record 139 X-Trial appearances and secured his fortieth consecutive podium.

The biggest shocks of the night were provided by the youngest rider in the field Toby Martyn (TRRS) who became Britain’s first podium finisher since James Dabill at X-Trial Montpellier four years ago.  Martyn is the first rider to have lowered the colours of Toni Bou in 2022, snatching a bonus World Championship point by topping the Round One Standings as the only rider successfully through Section Two.

Matteo Grattarola (Beta) remains third in the series Standings despite failing to back up his outstanding performance in Nice with another podium finish.  The Italian left himself with too much work to do after finishing just sixth with a seventeen-mark opening run, behind both Jaime Busto (Vertigo) and Sondre Haga (Beta).

Toni Bou (1st): “It was a very demanding X-Trial and the win was far from straightforward.  I didn’t feel comfortable in the first Round and made some mistakes, but I changed bikes for the second Round and things went much better from there.  The Final was very close until Section Five that proved decisive.  It’s a second consecutive win so it consolidates my Championship lead, but Adam is riding at a very high level and keeping up the pressure.”

Adam Raga (2nd): “I am very satisfied with my riding tonight because I was able to remain competitive, which being just a point in the end underlines.  I made a few mistakes in the first Round but in general terms I have put in a strong performance.”

Toby Martyn (3rd): “I really don’t know what to say, I’m emotional now after managing my first podium in the X-Trial World Championship.  I had a really great first lap which was the root of this success.  I’d like to dedicate this result to everyone who helps me from day to day.  I really feel like I’m on the ascendency and that I am making steps forward every time I ride.”

The X-Trial World Championship returns to the Spanish capital next weekend for the first X-Trial Madrid since 2012 and the first in new venue for the series the Madrid Arena.