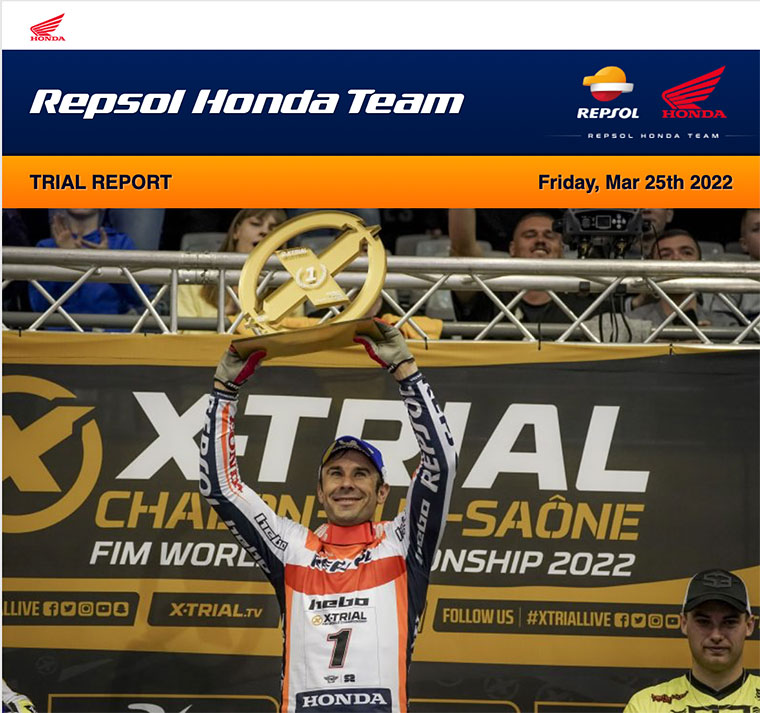 Repsol Honda Trial Team’s Catalan rider extends his lead in the X-Trial World Championship with a triumph at Le Colisée. Gabriel Marcelli posts eighth on his debut with the team.

It was a mixed bag for the Repsol Honda Trial Team riders as Chalon-sur-Saône made its debut as a venue in the FIM X-Trial World Championship calendar. Despite the difficulty of the sections and having struggled throughout, Toni Bou once again treated French fans to a display of his refined technique, clinching another narrow victory to consolidate his position as leader of the general standings. Gabriel Marcelli finished eighth on his maiden outing with the Repsol Honda Trial Team after being eliminated in the opening round.

In the first round, all the riders had to negotiate complicated and more technical sections than those faced in the Nice trial. Toni Bou finished second on his first lap through the sections, with 11 penalty marks, making the cut for the following round. Gabriel Marcelli, meanwhile, found himself knocked out. On his debut with the Repsol Honda Trial Team, the Galician rider, perhaps affected by a lack of experience whilst forced to open round one of the X-Trial, leading to several mistakes that saw him accrue 19 penalty points. In the second round, Bou conceded just two penalty points after errors in the first and third sections, thus gaining a direct passport to the final as the best rider of the second round. In the final, Repsol Honda Trial Team’s Catalan rider once again fought a gritty battle for the win over arch-rival Adam Raga, although in the end, the minor details were to prove the difference and hand victory to Toni Bou.

With a clean sweep of victories so far this season, Bou consolidates his position as the overall leader of the X-Trial World Championship with a tally of 43 points. In Chalon-sur-Saône, the Repsol Honda Trial Team ace also managed to pick up a bonus point for top spot in the second round of the trial. Gabriel Marcelli lies eighth in the overall standings on one point.

The third round of the championship is set to take place this coming Saturday 2 April at the Madrid Arena (Spain) and will once again feature Gabriel Marcelli alongside Toni Bou. After a 10-year absence from the calendar, the X-Trial World Championship returns to Madrid, a city in which the Catalan rider from the Repsol Honda Trial Team has previously won five times in the elite indoor category.

It was a very good trial for us. I don’t think there was that much more difficulty than in Nice, but it’s true that here there were sections that were very slippery and, in particular, there were a couple of areas that were really make or break. And that’s what we did. In round one I tied with Adam Raga, in the second lap too, and in the final I won by a single point. Raga didn’t make any mistakes, he only failed in the most complicated part of the rodeo, and that’s when I was able to capitalize and take the victory. We have started the championship very well with the two wins and achieving three of the four possible bonus points, but it is true that we are all battling hard for this world championship.

I started the trial by opening the sections, which is never easy. Also, I was a bit more nervous than usual as it was the first trial of the season with the new colours. In section one I already made a mistake and I think that’s why I wasn’t focused enough to tackle the following sections so calmly. It’s a pity that I couldn’t ride the way I know I could have ridden.

In round one, Toni was a bit nervous and he botched the last section when he had enough time to seal it. To be honest, I think he could have been first in that opening lap, but he is human too and he makes mistakes. In the second round and in the final, Toni showed his quality once again. That’s why with trials as complex as this one, Toni Bou has 30 world titles to his name. Elsewhere, Gabriel was very prepared in the warm-up before the trial, but when the event got underway he looked like any other rider. He was very nervous. He tried to enjoy this competition, but he didn’t really succeed. We’ll try and work on that over the coming days. He has a high enough level and I’m sure that he will prove it in the next trial in Madrid.