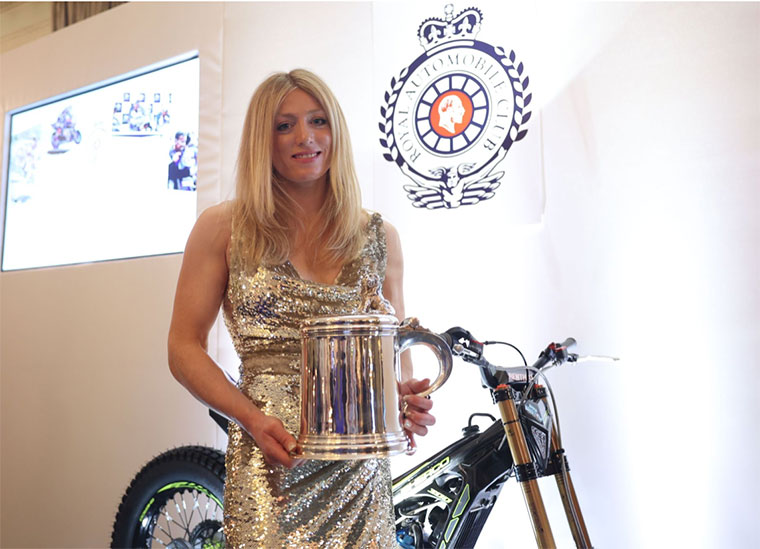 Emma is the first-ever female recipient of the accolade and also the first-ever trial rider to win. She won thanks to her 2020 TrialGP Women title but because of the pandemic had to wait a year to receive the trophy.

The 31-year-old British rider was presented with the trophy at the RAC’s Annual Motorcycle Dinner at its Pall Mall clubhouse in the heart of London.

“I’m truly honoured to have won the Torrens Trophy – and to be the first female winner,” she said.“I feel really honoured when you look at the names on the trophy of the people who have won it before me.

“I’m really looking forward to 2022 and I’m already working hard to try to win another world championship. I still want to keep improving and developing as a rider.

“Yes, I hope my success inspires more girls to get into two-wheeled motorsport but for me it’s also about girls seeing it’s not just the men who can ride bikes at a high level. We can succeed if we work hard and this is something I’m really passionate about.”

The list of previous winners reads like a who’s who of motorcycle sport with riders of the calibre of speedway star Tai Woffinden, MotoGP racer Cal Crutchlow, World Superbike champions Jonathan Rea, Tom Sykes and James Toseland and TT winner Ian Hutchinson all featuring on the roll of honour.

HEBO ON TOP OF THE PODIUM