Interview Takahisa Fujinami: “I like to help my riders with whatever they need” 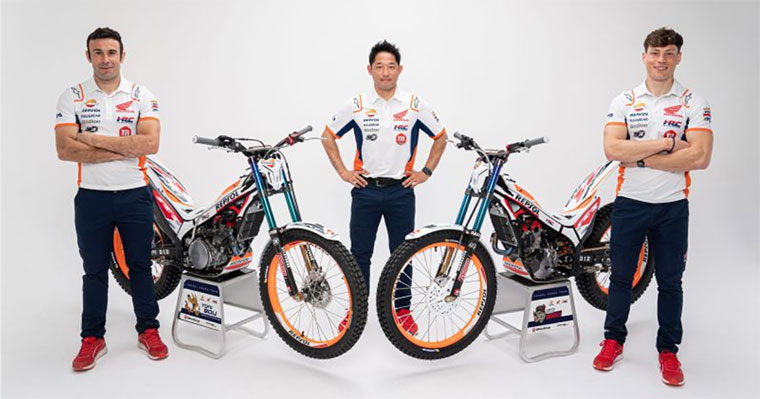 Repsol Honda Trial Team brings 2022 to a close with its homework done after winning the two world titles with the sights already set on the new season. Team boss Takahisa Fujinami reflects on his first year in his new position.

– 2022 has finished, a year that has been totally different from your previous 26 years in the world championship. As Team Manager of the world’s top trial team, what is your assessment of the season? Or put another way, was it the same or worse than expected?
The truth is that I have been lucky to be able to continue with this team, the best in the world, now as Team Manager. I have to thank HRC for placing their trust in me and giving me this chance. Toni is always strong but the important thing is that he doesn’t injure himself. This was one of the goals this season, that Toni didn’t get hurt. I tried not to force him physically so as not to take so many risks. I think his results: seven wins in TrialGP and three runner-up spots, plus four X-Trial wins and one runner-up place, show that he is stronger than ever at 36 years old. I am very happy to be able to help him. I’m also pleased for Marcelli. At the beginning of the year he was pretty nervous, probably the pressure of a factory team. Everyone was focusing on him a lot and he put a lot of pressure on himself to get results. He had to learn a lot of things to adapt his style to the bike. It was just a matter of time, and in the end he achieved several fourth places and, in the Spanish championship, he won the last trial, withstanding a lot of pressure. I am also happy with Gabriel.

– Gabriel, who had the tough task of replacing you as a rider in the team, has certainly gone from strength to strength. Finally two fifth place finishes in both Indoor and Outdoor. What do you expect from Marcelli in 2023?
Well, his level is quite high, but I think he could finish on the podium in every event of the year; we will have to fight for it and try to finish the championship with a medal.

– Toni Bou’s goal seems straight forward: repeat the final results with two more titles.
Yes, that’s right. We think he’s very strong and he’s got a long way to go. He has a lot of technical advantage over any other rider and on paper he can win the two world titles up for grabs in 2023.

– Let’s move on to another point: the preparation of the team. You have set up different collective tests and training sessions, with the participation of all the riders and mechanics. Is it working much better this way?
It used to be done that way before, but it was just between the riders who agreed to train together. Now it is a request of the team to train together. We have a number one rider and the other Montesa riders, Gabriel and Pablo, can learn from him. The trust that is created within the team is important; it’s like a family.

– What about the relationship outside the team? With the promoters or race organisers, with the other brands, team managers… All of this is really new for you. Have you been surprised by some of the issues?
For me it has been like starting from scratch in many things. For example, getting the licence. Before, the team did it, and now I have to manage it myself. My computer, my phone, I keep receiving messages, also from sponsors. It’s a huge change and at the beginning it seemed like it would be difficult, but we’ve adapted to it. Miquel [Cirera, previous Team Manager. Ed.] had it all in hand. Maybe we still need to learn something, but I think we’re on the right track, but doing it my way. Plus, I also have a good time doing this, I enjoy it.

– What do you like most about this job?
Helping out. I like helping Gabri and Toni in what I think they need. If the results come out the right way, it’s like a bonus prize for everyone.

– And what do you like the least?
Phew! The office work! (laughs).

– Speaking of changes, you were in Japan for the Honda Thanks Day and also to take advantage and spend a few days testing with the Japanese technicians and engineers at HRC. What have you taken away from the test?
In the end each rider chooses the bike he likes the most, with the engine and settings he likes the most. Then, there is the work with the engineers so that they can implement everything that the riders like. It’s a matter of time to get exactly what everyone wants, but overall we did some good testing.

– For next year the TrialGP World Championship seems to be back to “normal” with more races and the return of Motegi.
For three years now we seem to have been in “another world”, competing only in Europe and with one-day trials. The pandemic has also affected the team internally, as, for example, HRC technicians have not been able to come to Europe, to the events or to our development tests. Now it seems to be getting better and let’s hope it turns out good for everyone.

– At Honda Thanks Day you were paid a farewell tribute. What will happen in May in Motegi at the TrialGP World Championship race?
Many people have asked me to come back just to ride the final trial so that I can say goodbye to everyone, but obviously it’s not possible. I would like to, but I don’t have the level to do it and, besides, I have a job to do and I have to help the team.

– This year we have won a title that we hadn’t won for two years: the constructors’ title. Montesa is once again World Champion in the constructor’s category.
Montesa is the only 4-stroke bike competing in the world championship. People say that it is a heavy bike, but in reality, you get very good results with this bike. Maybe in some points we have a handicap, but there are other aspects where you have an advantage.

– So, I’ll let you get back to working with the team… and continuing to be successful!
Thank you very much!