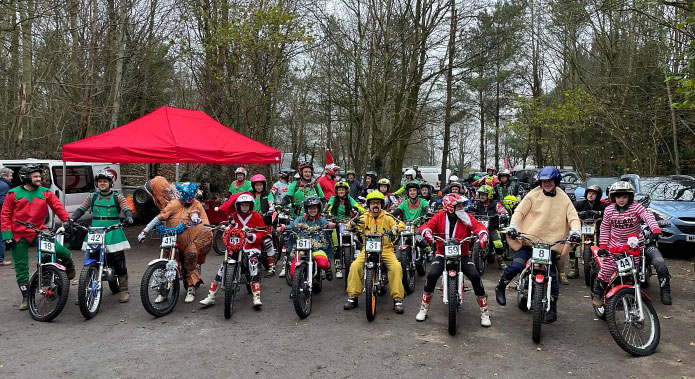 On Saturday 18th December Moto Trial NI hosted their final event of the year at Whitespots Trial Park on what turned out to be a fantastic day weather wise.
The trial was a thank you to the riders and members of the club for their support over the year and as the title suggested it was a “Festive Family Fun and Fancy Dress Trial”.
Almost 70 riders took part with many joining in the theme by dressing up, we had elves, pirates, a turkey, Santa’s, a dinosaur and even Ali G made an appearance!

As well as that many riders had their bikes done up with tinsel and fairy lights too. 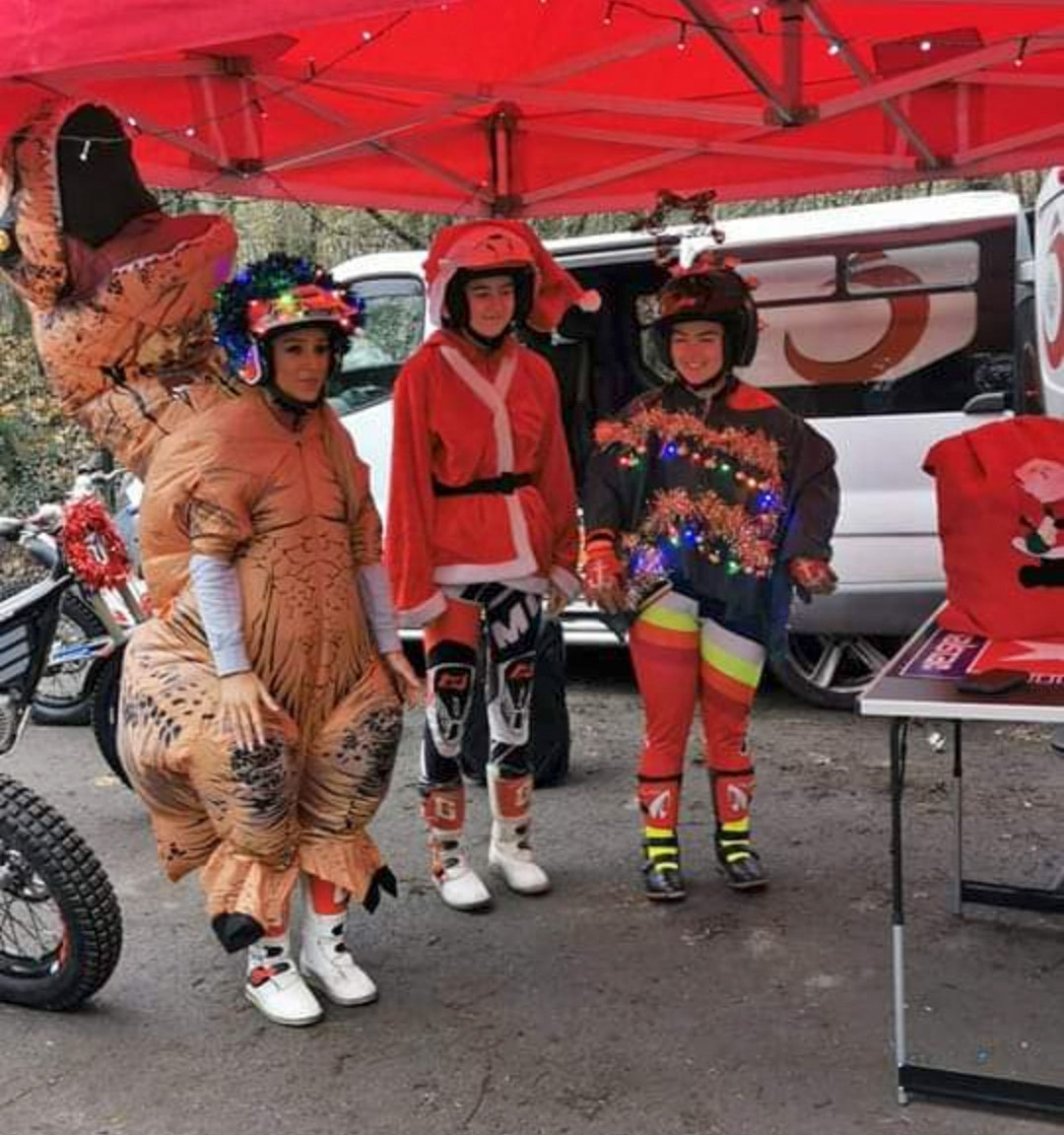 The trial itself was staged over 4 laps of 8 mostly new sections sourced as ever by Russell Houston who really goes to great lengths to ensure the riders are tested, but still keeping it a safe and enjoyable event. 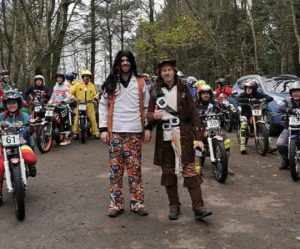 In the Clubman grade as usual it was a tight affair with Desy Leckey and Phillip McClurg pushing each other for the win with a host of riders chasing behind them for the other spots. Phillip ran out winner on 4 marks lost with Desy second on 8.  Third home was James Chambers on 9, who pipped Glen Curry by 1 mark. The stand out results in this grade were by far and away those of 10 year old Mason Crawford in 5th and 11 year old Sophie Ferguson in 7th.  Both riders have been members of Moto Trial NI from the day they stepped onto bikes a few years ago and both are part of the small group of local riders who compete at National level in England.  To raise their level they both rode this event above their normal grade and mixed in with the adult riders, and it was amazing but not totally unexpected to see them place so high in the grade.  Hopefully this form can be transferred into good results when the championships return next year in England. 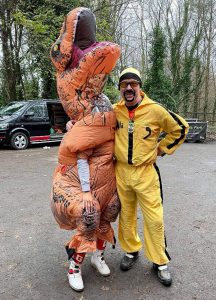 In the Sportsman grade it was an equally close battle.  The two at the sharp end of the grade were George Robinson, David Brown and Ian Page who after the 4 laps of 8 sections were separated by only one mark with George taking the win on a single mark lost, Ian and David tied for 2nd on two marks lost, Ian taking the tie break under the furthest clean method. 4th home was Gary Binnie with Micah Jones taking 5th spot. Davey “Ali G” Mulligan took 6th and stayed in character all day, even down to his big felt goatee beard!

Onto the Novice grade which is set out for total beginners to allow them to compete in the sport with no fears of it being too hard an event or unrealistic for them to get round the course. This grade was won by Ian Wylie on 7 marks lost followed by Phil Robinson on 9 and Ali Nicholl on 13 lost. 4th was Courtney Stanex taking advantage of home leave from the Navy to make a rare appearance out. Special mention too for Simon Fisher who finished the event having only taken up trials a few months ago as a total “newbie”.

There were four Youth grades and in the top A grade Dylan Smyth and Ross Allen battled all day and at the end could only be separated by a single mark with Dylan first on 9 marks and Ross on 10. Ross must be nuclear powered as he had arrived late for the event having played a football match beforehand! Oh to be young again! 3rd home was Shannon “Pixe” Smyth showing no fears or ill effects from a recent massive off at another event, great to see it didn’t put her off competing! 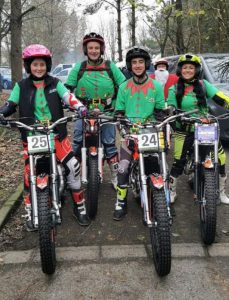 In the B grade Kyle Hewitt took the win.

While all the riders were enjoying the event Nicola and Stephen Coulter were busy at the paddock getting the festive food ready for the riders at the finish. Beautiful soup, mulled wine, as well as mince pies, chocolate, biscuits, tea and coffee were all prepared in the “family area” as well as a massive fire pit created to put heat back into the riders. This was very very well received by all the riders and committee members and it was a great sight to see so everyone chatting away and having a laugh at the outfits on display.

For sheer effort on the day Molly Perry has to get a special mention. She wore an inflatable dinosaur suit the whole day, even getting the batteries changed at half time which was no easy effort.

As always the club would like to thank the observers for giving up their time to help out, the landowners for granting access to what is the spiritual home of trials for over 80 years and most importantly to all the riders not only for this event but for supporting the club throughout the year.

The Club wish you all a safe, and Merry Christmas with your loved ones with special thoughts to those of us who have lost loved ones this year too. 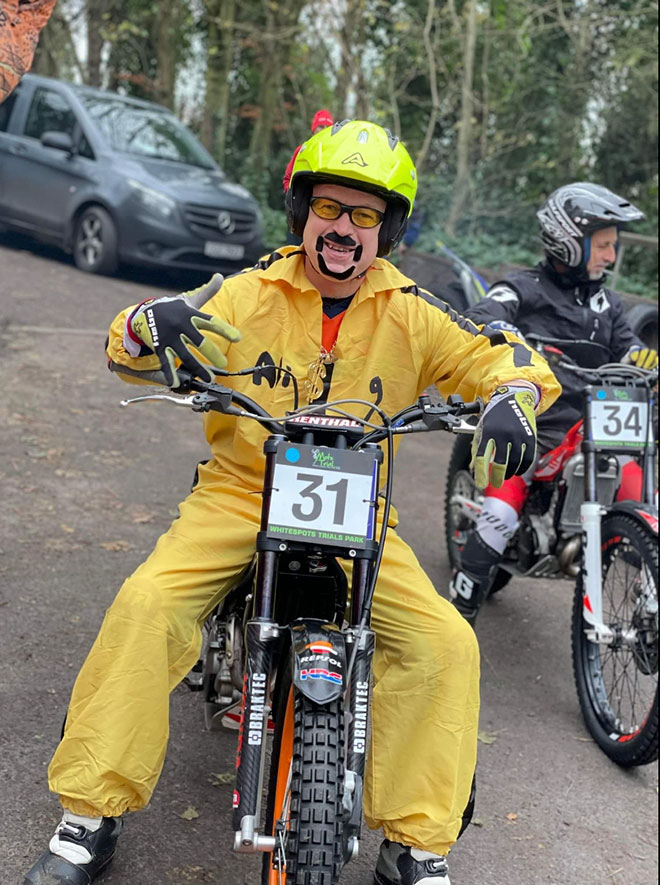 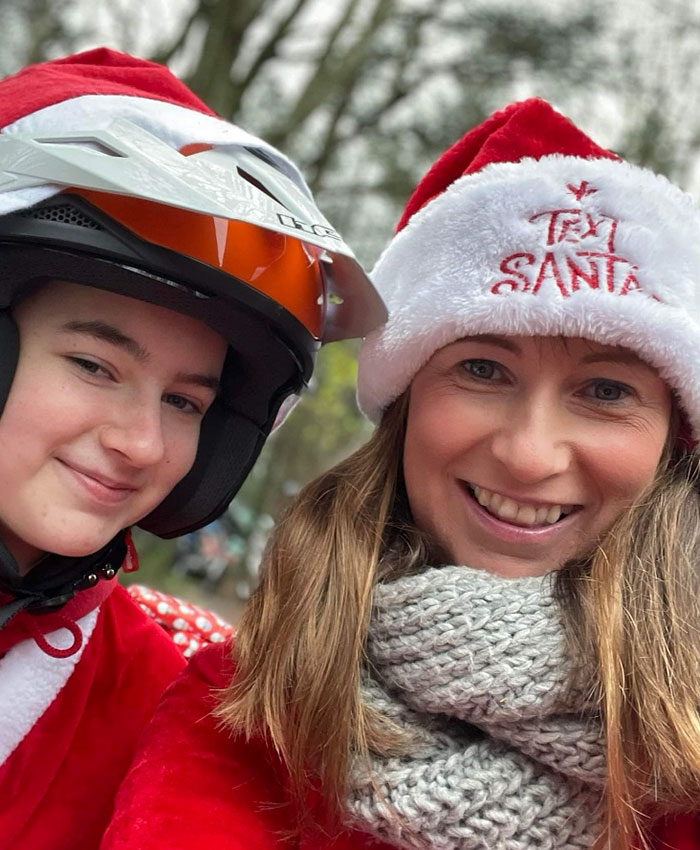