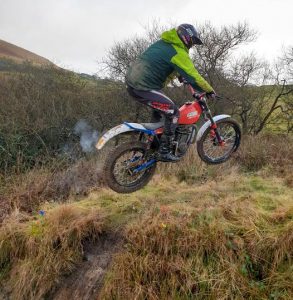 Red Rose Classic Trials Club resurrected the Paul Harrison charity trial to run on Bank Holiday Tuesday, 28th December after missing last year. A new venue was put to use, utilising the Darwen club’s Fishermans Retreat venue, and even throwing a pie and peas in the bar into the entry fee.

Trevor Bennet, Jack and Ben Butterworth laid out the sections before Christmas and had to check the stream levels hadn’t risen too far following the torrential overnight rain. Thankfully they were OK, but it became very muddy as the trial progressed.

The 60 riders were split to start in groups of six at each section– just in case Boris had tightened restrictions – and most enjoyed riding round in their groups to compare notes and provide moral support (or not!). The club also experimented with an intermediate class in preparation to adding it to the club championship for next year, and 16 riders took up the challenge, some dropping from the hard route and some upgrading from the easy. The inter riders rode the hard route in sections 2, 4, 5 and 7.

With this being a fun trial , Trev, Jack and Ben decided to add something different. After threatening a limbo and a see saw (a la Kickstart – check it on Youtube you youngsters) section 10 was a wheelie test. Similar to a graded hill climb, flags were spaced on a rising field from 5 to clean. Some were caught out by the slippery wet field and only got the wheel about an inch off the ground, and the antics kept those waiting in the queue for section 9 entertained  – there were some great, and terrible, techniques! Not unsurprisingly with mainly old blokes riding old bikes, this section was a major mark taker.

On the hard route, John Maxfield took a convincing win in the pre 65 class, loosing a mere 5 marks on his Bantam, 25 marks ahead of similarly mounted club secretary Andrew Scott. John lost his marks in odd dabs round the course, whereas Andrew lost nearly a third of his on the wheelie section.

The twinshocks on the hard course was a lot closer, with the Clerks of the Course being beaten into second (Ben) and third (Jack) by the irrepressible Kieran Hankin, though he nearly blew it loosing 2 of his 3 marks on the wheelie section. Jack squeezed into third on a most cleans tie break from John Holdsworth, Jack loosing six of his eight marks on the very tough climbing eighth section that got slippier on each lap.

3 pre 65 riders took on the intermediate route, and not unsurprisingly lost most of their marks on section 2, riding the hard route up a very slippy gulley from the lakeside. The result proved close though, with young Lucas Whittaker taking the win (despite a flat front tyre on his Cub) on 47 from the Fanny B of Mark Newman on 54 and Bantam mounted Andy Johnson on 68.

Paul Whittaker made it a family affair taking the intermediate twinshock win on his Kawasaki, and he also took the family bragging rights only loosing 30, with Steve Collinson, Zack Johnson and Dave Broderick finishing in that order behind him, all on 35 marks lost.

On the easy route Carl Winstanley lost only 13 to take victory in the pre 65 class from Simon Heyes on 42, and Steve Wilde taking the twinshocks from Colin Slater. On this route the main mark takers were the wheelie and sections 1 and 2, twisting over rocks and up banks near the car park, though section 8 was eased on this route after the first lap otherwise it would have proven to be a compete stopper.

The final results showed a harder trial than planned but the weather had a say in that, and congratulations to Chris Riley for finishing his first trial in a long time. He’s started lots, just not finished any. I won’t say who asked me to mention this, but Jeremy and Steve both owe me a pint!

Thanks go to the Clerks of the Course Ben and Jack Butterworth and Trevor Bennett and of course, our observers. The next Red Rose trial will be on 23rd January 2022 at Catlow Ford, Burnley.