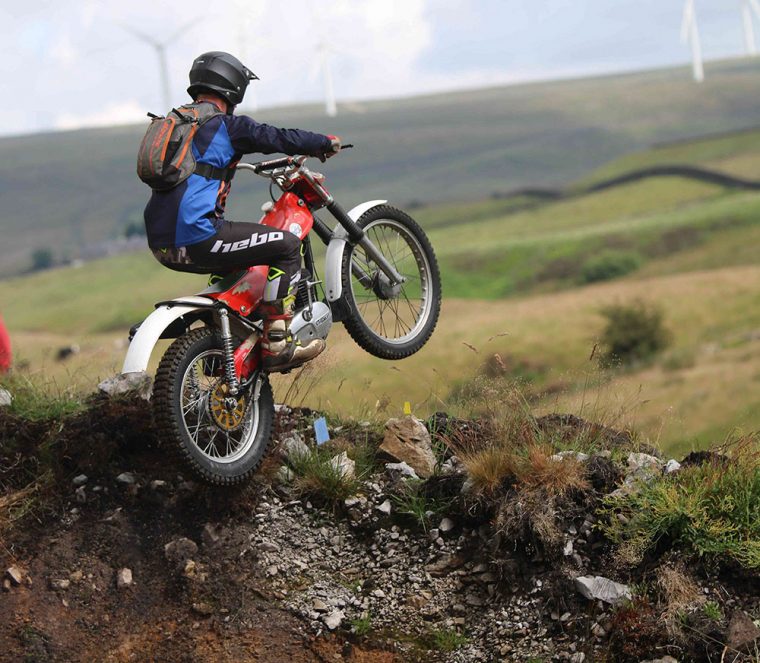 The Red Rose Classic Club held a charity trial to celebrate their most famous member, Yrjo Vesterinen, on 4th July, but sadly the main man couldn’t be there as he was stranded in Finland by  Covid isolation rules.

Club stalwart Trevor Bennet used his connections to fill the entry 2 months before the event, the start resembling a Rockshocks round with riders converging at Lee Dell Farm from all over the country to sample northern rocks, streams and banks laid out by Ben Butterworth and his team.

Two new challenges for a Red Rose trial were included – a graded hillclimb at section 17, the steep hill littered with small rocks that looked a lot bigger when you hit them, and a special test to decide ties. Rumour has it Ben included the special test (and got his parents to time it) as he is fed up loosing out on the oldest rider rule normally used by Red Rose. It didn’t help as he lost out on 3rd place in the Twinshock Elite route to Kieran Hankin by 0.6 seconds! The fastest special test time was set by Paul Heys who completed it in 23.1 seconds, winning him the Rock Shocks Trophy.

The Vesterinen Trophy, donated by the man himself for the lowest overall score was won by Dan Clark – despite riding the hardest route! His clean sheet won the Twinshock elite route from Wayne Braybrook who lost just one dab on the rocks of section 18 on his second lap.

The pre 65 Elite route victory went to Joel Gowan on his C15 ahead of Robin Luscombe and Paul Heys, whilst the pre 65 Experts was a tight finish with Peter Ashmore victorious on 1, from Tim Blackmore on 2 and Jim Hough on 3 – Jim’s 2 on the tight turns and mud covered rocks of section 14 spoiling his card.

Twinshock expert class winner was Andrew King who lost 2 on each lap, beating John Holdsworth and Mark Watmore, Mark not benefiting from spending Saturday being taught how to dry stone wall by Dan Clark – they don’t have dry stone walls down south!

The Clubman route pre 65 class fell to Darren Phypers from Clive Smith and Paul Morris on 2, 4 and 6 respectively, with the twinshock class going to the irrepressible Butch Robson on a dab from Andy Waters on 3 and Michael Platts on 6. Butch lost his mark on section 4, which was altered on the second lap to follow the expert route as it was easier than the clubman route had become. Judging by the video posted on Facebook it’s lucky Butch didn’t need to rely on his special test time!

5 ladies entered to ride the Clubman route so a Ladies class was created, though only 2 made it to the finish with Seren Walters having a great ride loosing a mere 19 marks ahead of Megan Hamblin.

A Gentleman’s class was introduced to give the less experienced or older riders an outing – though some of the route probably proved harder than the sections! The Pre 65 class only had 1 finisher – David Sales, and the twinshocks had 2, Ray Crinson convincingly beating Graham Ryding.

Special thanks must go to the observers who persevered through the rain, the riders who gave up their rides to help observe, and everyone involved behind the scenes to make the day happen. And last but not least the generous sponsors and raffle prize contributors who ensured a massive £7500 was raised to be shared between North West Air Ambulance, Pendleside Hospice and Manchester Children’s Hospital.