Repsol Honda Trial Team, all set for the 2022 season 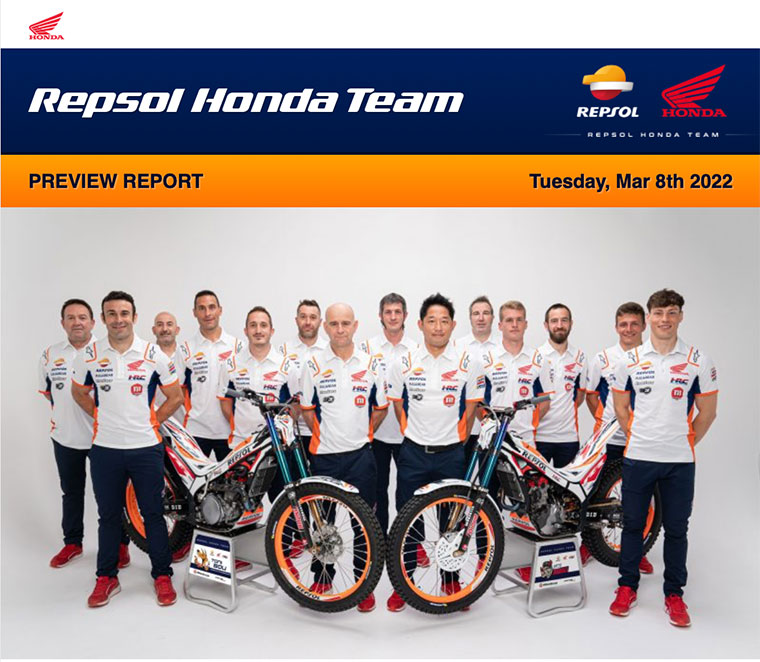 The new Repsol Honda Trial Team is poised to face the 2022 season. The FIM X-Trial World Championship is scheduled to kick off next week in France where Toni Bou will begin his championship title defence. The latest additions: Gabriel Marcelli is the most recent team signing while Takahisa Fujinami takes the role of Team Manager.

The trial season gets underway once again with the indoor competition. The 2022 FIM X-Trial World Championship season commences with a revamped Repsol Honda Trial Team whose riders will be aiming to seize the honours across the board. Pre-season work proved very intense, yet highly fruitful, with both the team and bike determined to push to the limit in the various competitions ahead.

Super-champion Toni Bou remains the spearhead of the Repsol Honda Team. After claiming an incredible 30th world title last October, the insatiable rider will be looking to further his extensive list of victories (125 outdoor and 69 indoor) by adding a couple more gold medals to his tally.

Joining Bou in the Repsol Honda Team pits this year will be the promising young talent Gabriel Marcelli. At just 22 years old, the 2019 Trial2 World Champion was the revelation in the top category in the 2020 season, finishing last year in great form with third place in the Spanish championship and fourth in the X-Trial World Championship, which he wrapped up with the runner-up spot at Barcelona’s Palau Sant Jordi.

Further news: after a lengthy, successful career as a rider – having hung up his boots at the end of the 2021 World Championship – Takahisa Fujinami takes over as the new team head. His vast experience will undoubtedly make him a valuable asset for the team management.

The X-Trial regulations have also undergone several changes for 2022, one of the most important concerning participation: whose globality has been prioritised to the detriment of quality. Thus, for example, Gabriel Marcelli – fourth place finisher last season – will have his continuity compromised and will be forced to participate as a wildcard entry in some of the trials.

Each event will be divided into three phases: Round 1, Round 2 and the Final. In the first round all 8 riders take part, after which two are eliminated. The final will be contested by the three top riders from the first two rounds. In the overall championship table, in addition to the points from the final positions, the winners of each round will receive a bonus point. 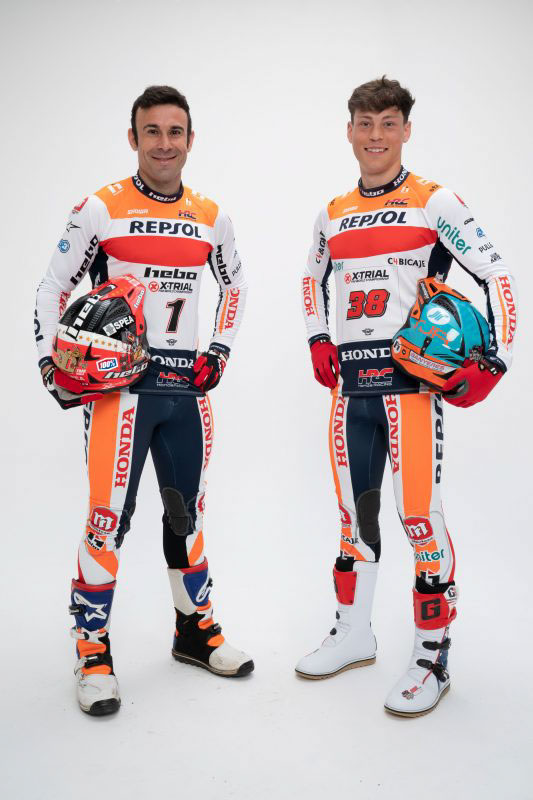 New Repsol Honda Trial Team Telegram channel
In addition to our social media accounts on Instagram and Twitter (@trialteamhrc), this year we are opening a new channel on Telegram (@trialteamhrc) so that our subscribers can quickly find photos, videos, results and comments after each event. It’s easy. Just log into Telegram, search for the account and subscribe – don’t forget to activate the notification bell!

We are getting a new season underway and, as always, we will be going all out. I think we have had a good pre-season and have worked hard, both on the bike and in training. I think we’re physically very well prepared for the first trial and we’re looking forward to it. The X-Trial regulations have gone back to what they were a couple of years ago and I think it will be better for everyone, because before a lot of luck factored into it. This year I will have Gabriel as my team-mate in the Repsol Honda Trial Team. He is a great rider, very hard-working and with a promising future. We hope to have a really good season.

This season is looking good, even more positive than the previous ones. I am in the best team in the world and it gives me great personal satisfaction that they have placed their trust in me. I will try not to disappoint them and try to do my best in every trial. It’s a pity that I won’t be able to attend the first round of the X-Trial World Championship because it will compromise my battle for a better final championship position. The rules are a bit unfair, but that’s the way it is. I will try to give 100% in the trials that I can take part in and try to get as many points as possible. In the TrialGP championship it will be much more difficult, with some very strong rivals, but we will fight to be among the top riders in every trial.

For me this is a huge change compared to last year. I’ve known Toni Bou for more than 15 years and, seeing him training these last few weeks, I can say that he is stronger than ever. In this sense, I’m quite confident that he will have a great season. With Gabriel Marcelli, who has joined the official team this year, something similar is happening: he has improved a lot. He has made a big change, both mentally and technically, and the team has helped him a lot. It’s a pity that he can’t be in the first X-Trial race because of the new regulations, but we are confident that he will be able to join us in the following races. It will be difficult for him to be in the fight for the championship win, but I’m sure he’ll be among the top finishers as he was last year, for example, at the Barcelona X-Trial.
This pre-season the team has worked harder than ever, not only the riders, but we have also managed to improve the Montesa Cota 4RT so that could bring us great successes this coming season… just like over the last 15 years!
We’re really looking forward to the 2022 season!

VERTIGO GROWS IN THE WAKE OF NITRO SALES