Second place for Toni Bou on Andorra TrialGP day one 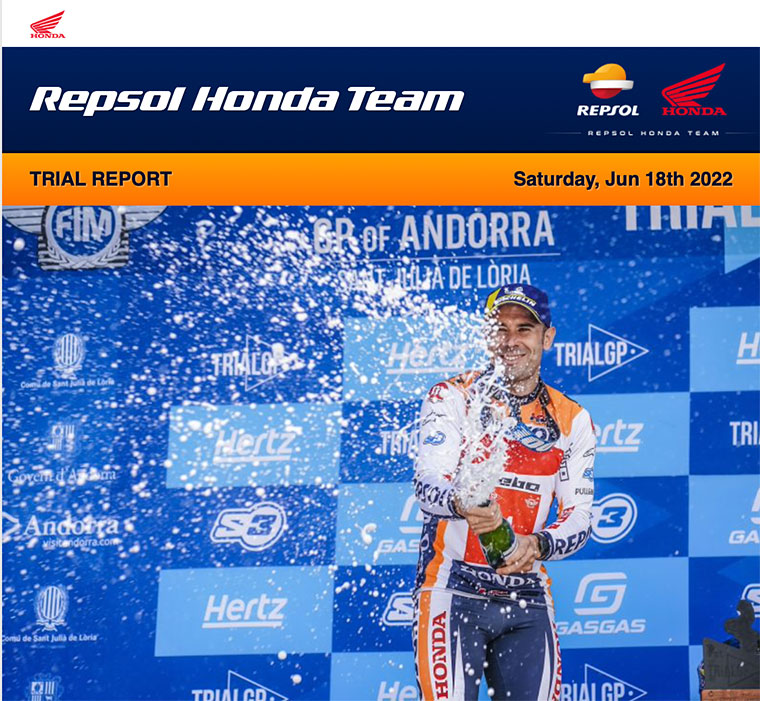 Repsol Honda Trial rider Toni Bou climbed onto the second step of the Andorra TrialGP podium, after a battle for the win which went to the final sections. Galician team-mate Gabriel Marcelli was fifth on the first day in Sant Julià de Lòria.

The demanding river sections and a lack of grip marked the first day of the TrialGP World Championship in Andorra. Despite having been in the fray for the final win right up until the final sections, Toni Bou’s day in Sant Julià de Lòria was anything but easy. The Repsol Honda Trial Team rider committed an excess of errors on the first lap, especially in the more complex sections. On the second time around, Bou received three more maximum penalties that weighed the points in favour of his main rival, Adam Raga. In the overall standings, Toni Bou remains in the top spot on 54 points, 8 more than his nearest pursuer.

Like his team-mate, Gabriel Marcelli also struggled in the troublesome river sections and made several mistakes on both the first and second laps. In spite of this, and the very closely matched level of the participants, the Galician rider battled throughout the day for the podium, before eventually finishing the first day of the Andorra TrialGP in fifth position. Today’s result means Marcelli now holds sixth in the overall world championship standings.

In the final two sections I had practically lost the trial but I wanted to take a risk, I didn’t want to put my foot down, but the front end of the bike slipped a bit and I fived. The trial was lost on the first lap, we were looking more to the back than to the front because we had the rivals very close. I was trying to protect the championship. We have to be very consistent, try to stay at the front, but it’s very difficult because there’s some very tough competition. I think we were competitive in the second lap, but not in the first lap and we lacked that ‘extra bit’. Second position is a positive result towards the championship. Tomorrow will be a decisive day for us, we will have to go out and attack at our best.

Today we got a fifth position, not a bad result, but we wanted more: we were hoping for the podium. Until almost halfway through the second lap we were fighting for third position, but in the end I came up against the final sections, I made some mistakes and we went from third to fifth position. Tomorrow we will have to push harder and fight for the podium.

Toni didn’t start very well today. He started to make mistakes in sections 3, 4 and 5. When Toni started to tackle the water sections and made mistakes that other riders didn’t make, it was a bit worrying, but he finished the first lap in second place. The final lap he started quite well, taking some risks in the sections, he made up some points and it looked like he could grab the win, but finally he made some more errors which left him in second place. It’s a pity, but that’s trial for you and I’m sure that tomorrow’s event will be much better for Toni and he will go all out for the win. Regarding Gabri, the trial was quite good: until the middle of the second lap he was fighting for third place on the podium, but it was a pity that in the end he was fifth due to the closely matched riders. Today he showed that he had a chance to fight for the podium and I’m sure he will also get a great result tomorrow. 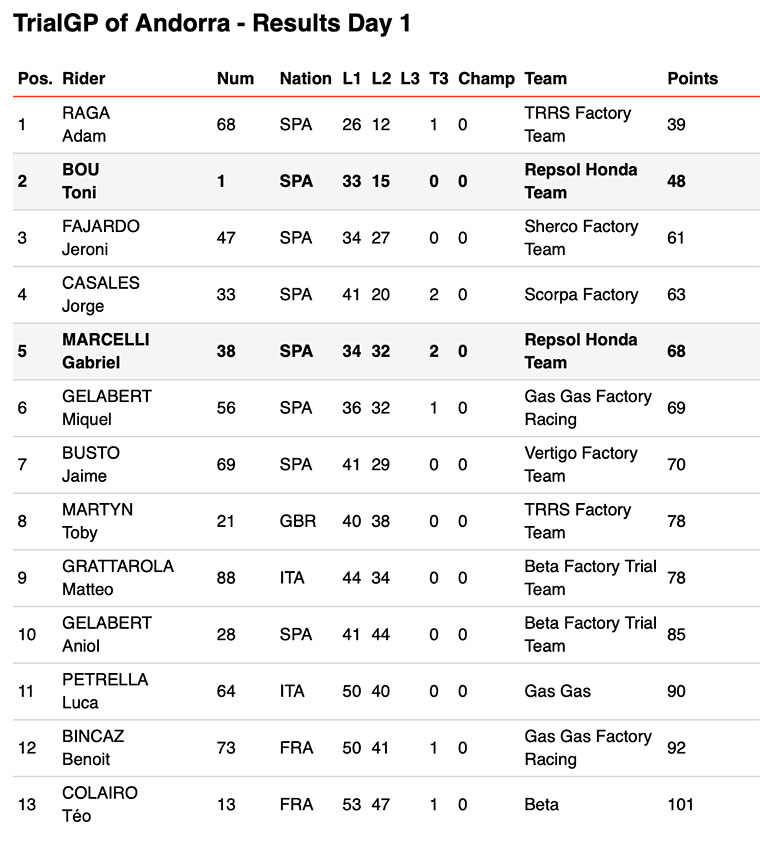