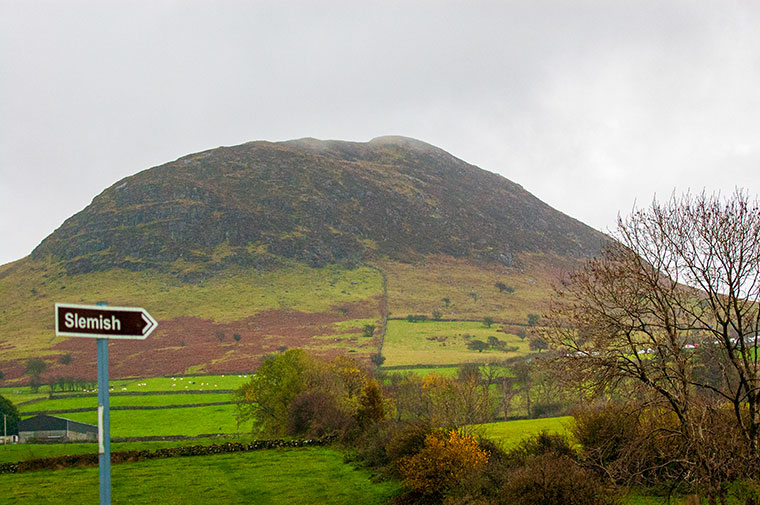 Slemish mountain is the remains of an old volcano some 55 million years old. Allegedly it is the site where saint patrick was a sheep herder and also where he found his religion.

Over the more recent years it has been a favourite for walkers – the towering rock stands 200 metres over the surrounding flatlands and weather permitting, it provides views of neighbouring Scotland to the east and lough neagh to the west. 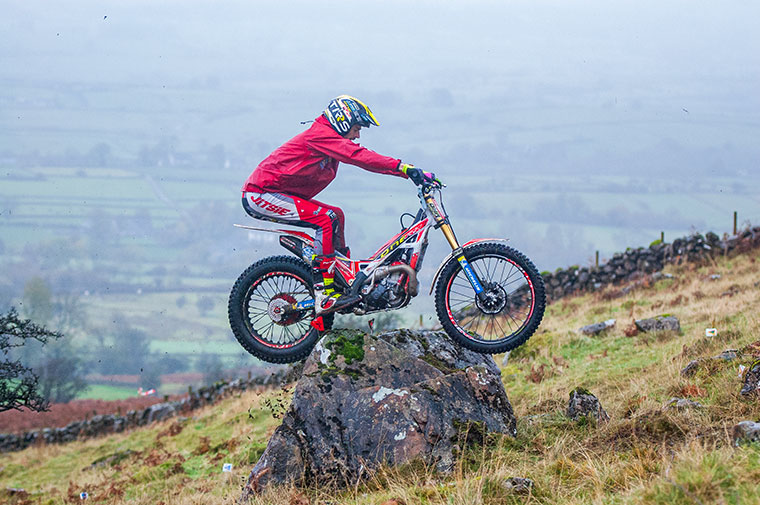 Slemish is also a safe haven for the local wildlife and for birds like buzzards, wheatears and meadow pipits to name but a few.

Today however there was no lava and the old volcano instead erupted with two-strokes and Lycra. The walkers were replaced by observers, The visibility was minimal in the biblical weather and the only animals in sight were the riders. 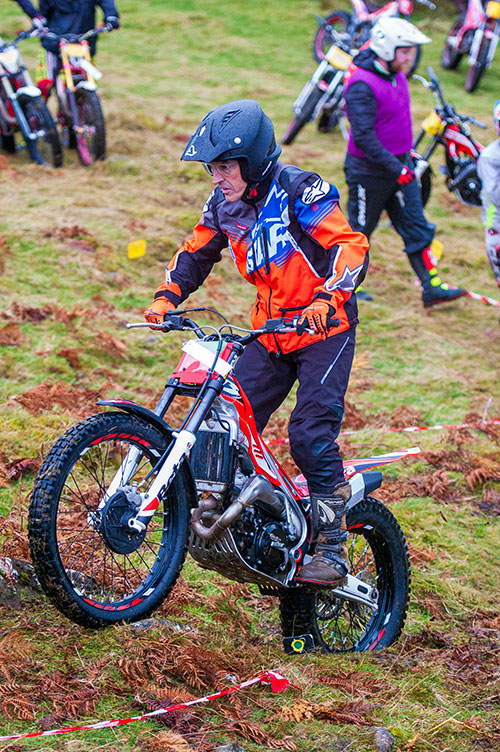 With the rain coming in sideways and the wind strong enough to put riders off line, the conditions made this technical round even more of a challenge – a challenge that elite rider Josh Hanlon wasn’t looking forward to before setting off up the hill. 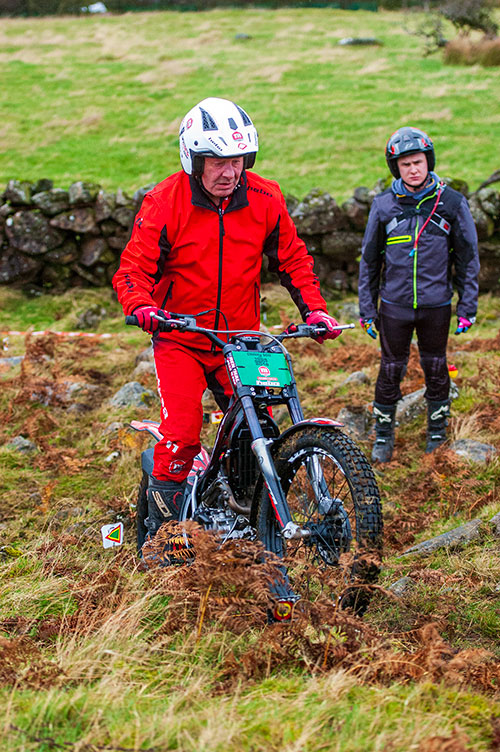 Despite all this, the weather and conditions underfoot did not detract from the fantastic 13 sections set out by the Mid-Antrim Motor Club (trials section) for round 3 of the Ulster Trials Championship.

The dogfight continued in the expert elite class between Josh Hanlon and Stuart McClurg.

Hanlon’s angst at the start of the day must have gotten the better of him on lap one recording 24 points lost, though he soon composed himself to score 20 points lost on lap two and again on lap three. It was a battle lost at the first hurdle though as McClurg tore through the three laps recording 15, 18 and 18 points lost, gliding into first place in the championship by a single point. 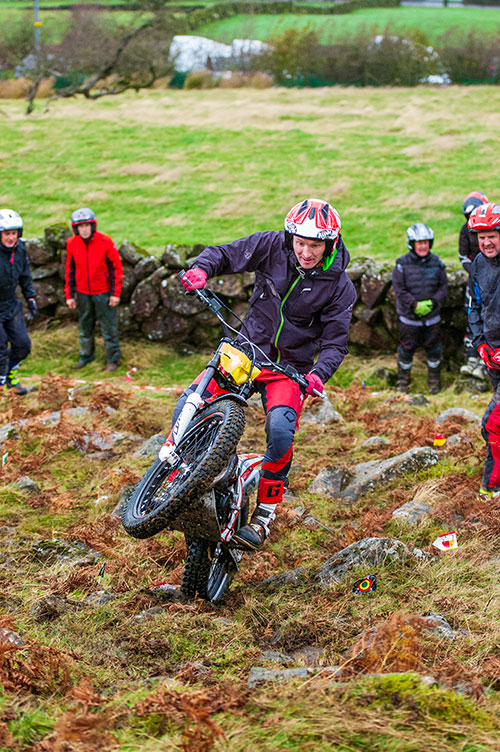 Of the three riders Abram was the only one to conquer the big rockstep in section 2 on every lap, and it is something I have noted over the course of this season so far. The daunting looking obstacles no matter how treacherous they appear, offer no concern to Abram as he seemingly dispatches them with ease. One has to wonder where he is losing the points, is it lack of concentration because certain sections lack the excitement of the big obstacles? Or is it a little bit of haste with his speed?

I’ll tell you one thing for free, if he figures it out this could quickly become a three way brawl for the expert elite class.

Once again Jake hanlon extends his championship lead in the expert class with a third win from three attempts and his 60 championship points setting him 19 points clear of Alex Lennox. In an attempt to limit the damage Lennox rocked home in 5th place on the day with Stuart Hanlon and William Dickey Jr claiming the 2nd and 3rd spots respectively.

The semi expert class saw a hotly contested fight for 2nd and 3rd place on the side of the mountain as Neal Perry and round 2 winner Sam McCallion hammered away all day to have their end results tie and their placement decided by a count back on clean sections.

Aaron Smyth had a stellar ride losing 26 points all day, a display that took an alarming bite out of Stuart Hanlon’s 11 point championship lead leaving Smyth only 3 points adrift and snapping at Hanlon’s heels for the lead. 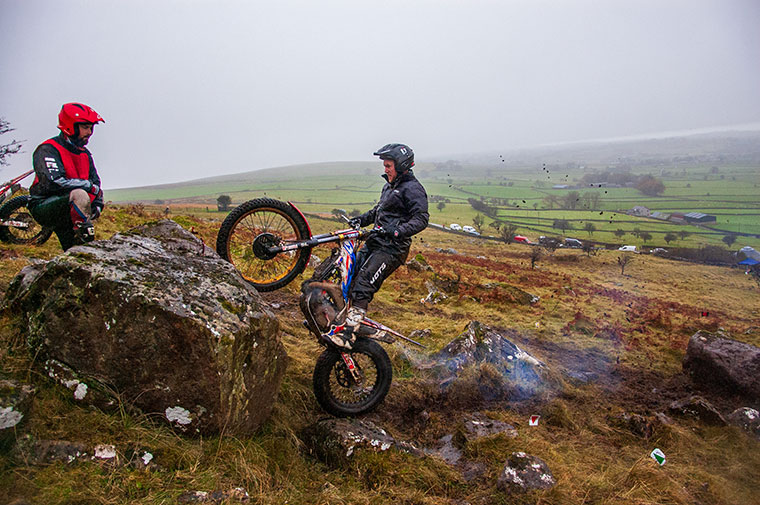 Clubman riders Terence McKee, Philip McClurg and Desy Leckey looked to be on a roll with only three points separating 1st and 3rd place by the end of the last lap.

Leckey’s 3rd place finish was enough to hold on to the championship lead by 3 points from McKee.

While all the competitors and observers deserve applause for braving the conditions there are always people who grab your attention, this week one of those was former 250cc Grand-Prix winner and Moto-Gp legend Jeremy McWilliams.

So if you were ever wondering what ex-Grand Prix racers do on their time off in between developing/testing motorcycles and racing armchairs in the states, it would seem that they spend the day knee deep in mud getting taught how to ride a motorcycle by their son.

Jeremy and son Jack were both competing in the clubman class, but it was young blood that came out on top to out-ride his father by one point. 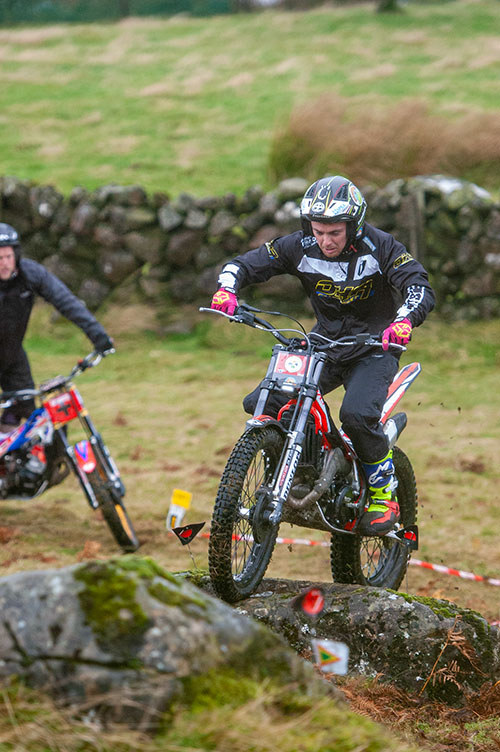 Another character I came across was 93 year old Drew Armstrong, who decided the conditions were too risky to traverse the slippery terrain and after our short chat retreated to his car for a cup of tea before heading home. Drew told me how he was involved with the creation of the Lightweight Club and is a former vice-chair of the MCUI-UC where he was one of the people responsible for bringing the FIM World Indoor Trials to Belfast in 2005.

That sums up round 3 and once the riders and observers alike came down off the hillside, it was time to remove the plastic bags from inside their boots and go home to dry off their soggy drawers and begin the preparations for round 4.