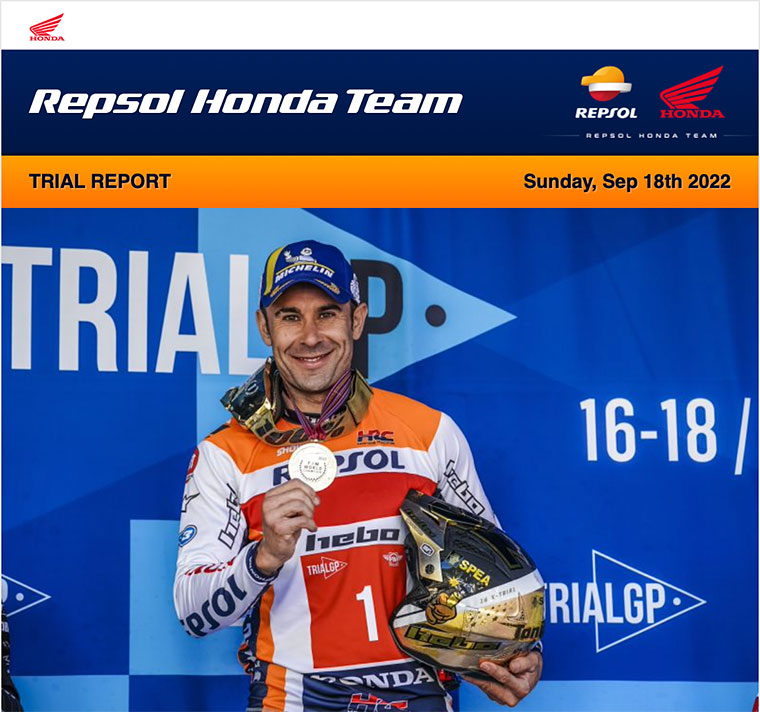 The flamboyant 2022 TrialGP World Champion, Toni Bou, wrapped up the season with a win in Ponte di Legno. Gabriel Marcelli, fifth in on the day, concludes the world championship in fifth. And Montesa succeeds in adding a new constructors’ title.

The curtain has come down on the TrialGP 2022 World Championship season today with Toni Bou adding the finishing touches to it, grabbing the final triumph of the campaign. Today’s trial at Ponte di Legno proved easier than yesterday’s, with the event organisers making some modifications to certain sections of Saturday’s course rendering the route less complex. Despite this, Toni Bou gave a great demonstration of technique and riding prowess throughout the day, with an excellent second lap, leaving his main rivals in his wake to round off the season in style. Today’s triumph in Ponte di Legno means the Repsol Honda Trial Team rider closes the 2022 season with a total of 7 victories, 3 runner-up spots and a new TrialGP world crown, his 16th on the spin.

Meanwhile, Gabriel Marcelli left it until the final trial of the 2022 TrialGP season to manage to sneak into the top five. The Repsol Honda Trial Team rider made some mistakes on the first lap that hampered his chances of a podium, yet, despite a fine second lap, Marcelli had to settle for fifth place. With today’s result in Italy, the Galician rider has achieved his best ever finish in the TrialGP World Championship with a noteworthy fifth position, with a total tally of 109 points in his first season with the Repsol Honda Trial Team.

The final day of the TrialGP World Championship was also a special day for Montesa, which, thanks to the great work from the marque’s riders in the TrialGP and Trial2 categories throughout the season, Montesa were able to claim a 23rd constructors’ title.

The last trial in Italy, brings the 2022 TrialGP World Championship to an end for the Repsol Honda Trial Team. The next date on the calendar for Toni Bou will be this forthcoming Sunday, 25 September in Monza, where the Montesa rider will take part in the Trial de Nations representing the Spanish national team.

I’m very happy with the way the weekend went. Today I had less pressure, although it was complicated because it was an easy trial where you couldn’t make many mistakes. In fact, I got a five for stopping in the fifth section, a section that was quite easy, and then I had to try to recover. At that moment, Adam Raga was still on zero, Matteo Grattarola had only three marks and I already had six. It wasn’t easy, but we fought well and we got a victory with a very great last lap, scoring just one point. I am very happy and grateful to the team. Once again, we have had a very good season, with 7 wins, 3 second places and never off the podium. The team has worked hard but we have room for improvement. We are working hard on the bike and I’m sure we will continue to take steps forward.

Overall, the season has been positive. I would have liked to have achieved some podiums and get closer to the top positions in the overall, but finishing my first season in the Repsol Honda Trial Team with a fifth position in the World Championship is a good start. It’s my first top five in the TrialGP World Championship, so I’ve been able to see my progression during all these years, especially during the final trials of the season, in which my progress improved. We hope that next year everything will go better and we can achieve podiums.

I am very happy with how my first year as team manager has gone. Toni has won two more world titles, Montesa has won a new constructors’ title and Gabri has finished the season in very good form, especially in the final four events. It’s a pity that Gabri couldn’t finish on the podium, but he ended up fifth in the world championship, when he came here in sixth place. Toni’s triumph today in Italy was the icing on the cake for a magnificent season.
As for the constructors’ title for Montesa, I am very happy about that. All the Montesa riders have done a great job this season. It’s a pity that Pablo Suárez didn’t win the Trial2 title in the end, but his victories also helped us to win the constructors’ title. 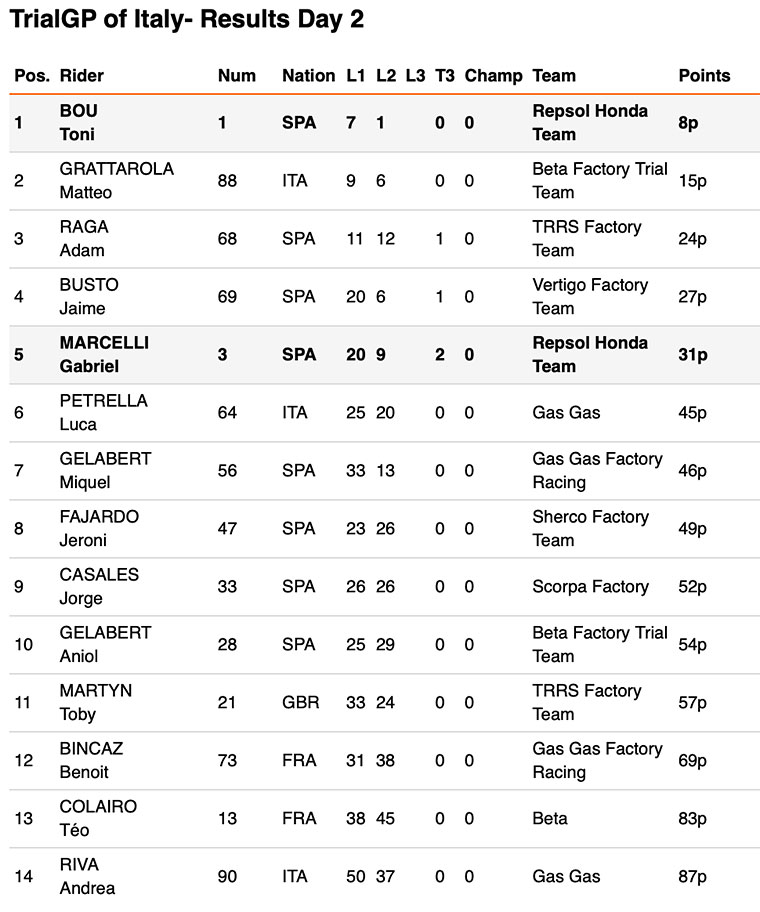