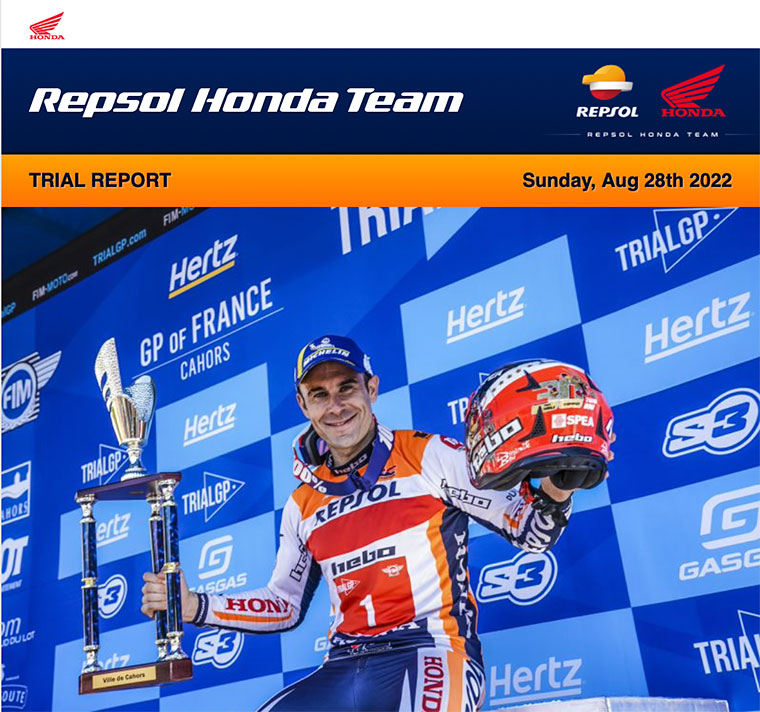 Repsol Honda Trial Team rider Toni Bou sealed a crucial and comfortable victory in the French town of Cahors that moves him ever closer to a new TrialGP title. Team-mate Gabriel Marcelli, was fourth on the day after a very closely-fought battle for the podium.

As the 2022 TrialGP World Championship heads into the home straight, the world championship riders were once again faced with the scorching temperatures of Cahors, a course with stone-filled natural and artificial areas, adapted into the urban landscape.

From the get-go, Toni Bou showed great technical and riding prowess, dominating the first lap from start to finish and collecting just 6 penalty marks. The Repsol Honda Trial Team rider’s performance was outstanding in sections 3 and 11, with Bou managing to avoid a fiasco and gaining the edge over his rivals. The Catalan rider got the second lap underway with an error in the highly complicated section 3, although his solidity throughout the remaining sections proved sufficient to claim another triumph in the TrialGP World Championship, a sixth of the season. The win in France means that Bou now holds 154 points, 36 points ahead of the second-placed rider as he closes in on a 16th TrialGP title.

Gabriel Marcelli also had a noteworthy trial in Cahors. The Repsol Honda Trial Team rider finished the first lap in sixth spot before getting involved in a hard-fought tussle for the podium positions. On the second lap, the Galician rider was able to rectify many of the mistakes made on lap one, even reaching third position, before eventually posting fourth final place, just one point shy of the podium. Today’s TrialGP of France result sees Marcelli in sixth overall, with a total tally of 85 points.

The curtain comes down on the TrialGP World Championship with the forthcoming TrialGP of Italy, set to take place from the 16th – 18th September in the Italian town of Ponte de Legno. There, Toni Bou could seal the 16th TrialGP title on the opening day of competition, while Gabriel Marcelli will do battle to try and score a top five finish in the general standings.

Today we got off to a very good start. I felt good on the bike and that showed throughout the trial. It was a trial with few mistakes, but with the chance of messing up, so we had to be careful in the most complicated sections. The only serious error I made was in the tricky section three. Overall, we had a very complete trial, picking up just 12 marks. I’m very happy and in terms of the championship, these are very important points. In Italy we will have to have a normal race, taking care of the physical aspect and the bike too. We will go after another title, after a very good year in which we have been very consistent in all the championships.

As the season has gone on, the feelings have kept improving. That’s very positive. It’s always better to finish the season at a high level with good sensations than not to start well and end it very badly. So, in that sense we are happy. The truth is that today the trial went quite well, I made a few mistakes, but they were costly, as they ended up jeopardising me in the end. From second or third place, I ended up fourth. Nevertheless, they are important points towards the championship but, with the podium so close, it leaves a bitter taste to finish fourth.

We knew that the sections in Cahors are quite well suited to Toni’s riding style and perhaps that gave us an advantage over our rivals. Indeed, Toni Bou showed his strength on this type of terrain, leaving the second-placed rider 13 points behind. Bou rode a very good trial and was only 4 points away from a new TrialGP title. We hope to have a good weekend in Italy and win the title on Saturday. As for Gabri, he was fourth again, although this time he was very close to the podium. Gabri’s riding was fine. You can see that he is getting more and more confident with the team and with himself, and he is very close to his first podium and a new double in the TrialGP World Championship for the Repsol Honda Trial Team. 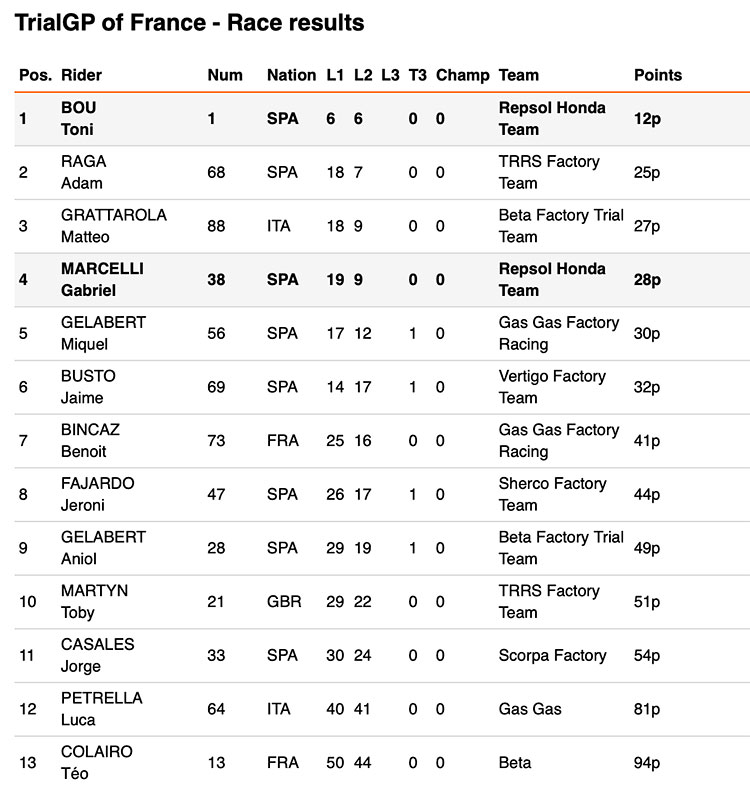