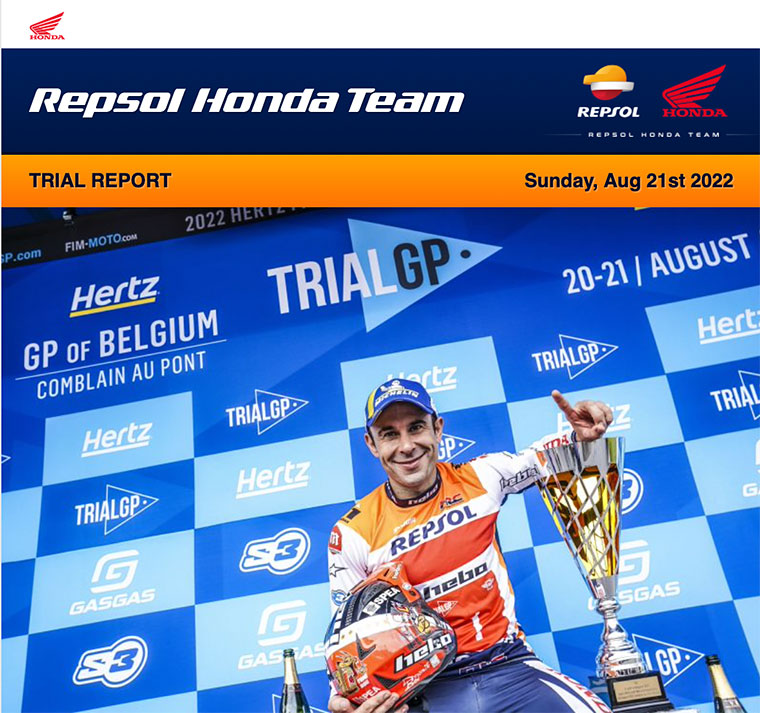 Repsol Honda Trial Team rider Toni Bou kicked off the second half of the season with yet another triumph in Belgium. Gabriel Marcelli posted a commendable fourth place on the day in an extremely evenly-matched trial.

With the summer break over, the Repsol Honda Trial Team riders were back in the thick of the action today for the TrialGP of Belgium. The single-day event was characterised by a demanding and somewhat technical course, full of slippery sections with very little grip that proved a tough test for all the riders involved.

The final stretch of the season got off to the best possible start for Toni Bou, achieving a fresh victory in Belgium which sees him consolidate further his grip on the overall championship lead. Despite the upbeat final result, the event in Comblain-au-Pont was anything but easy for Repsol Honda Trial Team’s Catalan rider, who finished the first lap of the course in second position and was forced to run risks on lap two in a bid to seal the win. The triumph ended up tipping in Tony Bou’s favour in the final three sections where he proved to be unmatchable. The Repsol Honda Trial Team rider’s win today in the tiny Belgian town marks a fifth outdoor victory of the season and a fifth TrialGP win on the spin at Comblain-au-Pont, as well as victory number 130 for Bou in the outdoor world championship. In the overall standings, Toni Bou is the runaway championship leader on 134 points, 26 points ahead of the nearest second-placed rider.

The TrialGP in Belgium was also a very positive one for Gabriel Marcelli. Repsol Honda Trial Team’s Galician rider, now fully recovered from physical issues prior to the holiday break, turned out a fine performance on lap one of the course, good enough to hold third place. On the second lap, Marcelli was able to rectify some of the errors made on the first lap, before eventually settling for fourth place after a tight battle for the third step of the podium. With the result of today’s competition, the Repsol Honda Trial Team rider remains seventh in the overall standings with a tally of 72 points.

The TrialGP World Championship moves forward with the eighth date of the season to be held this coming Sunday, August 28th, in the French city of Cahors.

It was a very tight race, where we couldn’t make many mistakes. On the first lap we made errors in sections 3 and 11, where we dropped a lot of points. On the second lap, I came out very focused, trying not to make mistakes in order to pull back, although I made a big mistake in Section 2, which I was attempting to clean. I took some risks that could have been avoided which made the trial all the more tricky. Fortunately, from then on, I rode very well, stayed focused on the goal and in the end we were able to seal another win in Comblain-au-Pont. I am very pleased. I felt at ease on the bike and I was able to fend off my rivals, even though I’m not a rider who specialises in terrain like today’s. In terms of the championship, it’s a very important win. It’s great to pick up points here and to continue to gain points on our rivals for the title.

It was a bit more of an old-fashioned trial, more about riding skills and how to handle the bike. The truth is that I’m very pleased with the way I rode today, because it’s a type of terrain that I’m not particularly good at. It’s true that I struggled a bit at the start of the trial, but I soon managed to change my mindset and I started riding the way I knew I should. So, I consider that a fourth place in such conditions is a great result and some very important points towards the championship. It’s true that we are always looking for a bit more, we wanted the podium, but fourth place is more than acceptable.

We are very happy with Toni’s win today in Comblain-au-Pont. It is true that, in the first round, Toni had a fiasco in sections 3 and zone 11 and that hampered him a lot; so much so that he finished the lap in second place. On the second lap, he fived again in section 2 but, finally, he was able to pull back to take the victory. At first glance, it might seem that he won by a wide margin of points, but the truth is that the race was complicated and everything was very tight until the final sections. As for Gabriel, he managed to finish the first lap in third position and on the second lap he fought until the end to get that third podium spot, or even to be second. It is a pity that he made two mistakes in sections 8 and 11, as they ended up dropping him down to fourth place. Even so, he should be very proud and hold his head up high, because in this championship everything is very tight and, although he is still seventh overall, he must continue to fight in the three remaining trials to keep climbing positions. We hope that Toni and Gabri can get onto the podium in the next event in Cahors.

Bou’s on Pont in Belgium!