Ten years on from his victory at the last X-Trial Madrid, the 2022 Championship leader extended his advantage 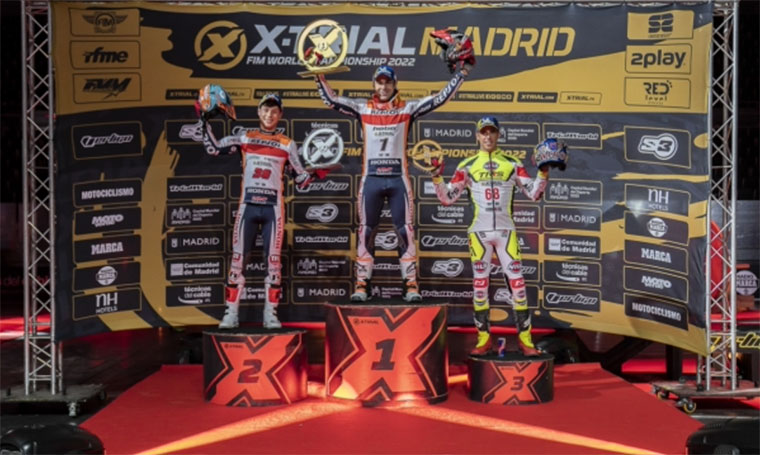 Toni Bou (Repsol Honda Trial Team) claimed his sixth win at X-Trial Madrid and his first in brand new venue the Madrid Arena, to extend his points lead by a further ten at the top of the title race.

The fifteen-times Champion picked up maximum points from the third Round of the 2022 season, courtesy of a five-mark victory in the Final, plus bonus points for topping the leaderboard in his opening two runs.  After comfortably the best ride of his career to date, Gabriel Marcelli claimed second position, giving Montesa Honda a 1-2 and helping Toni Bou to extend his advantage by ten points over Adam Raga (TRRS).  Raga lost out to Marcelli after a crucial failure in Section Four of the Final, a bitter end to the night on which he made a record 140th X-Trial appearance.

Jaime Busto (Vertigo) missed out on a place in the Final by just three marks after a strong second run, but he had already left himself with too much work to do after registering three fiascos in his opening ride.  Busto nonetheless recovers three Championship points on Matteo Grattarola in the battle for bronze, after the Beta man could only manage fifth with three consecutive fiascos at the end of his second run.  Miquel Gelabert (Gas Gas) finished sixth in his first appearance of 2022 thanks to a tie-break on time with teammate Benoit Bincaz in Round One.  Sondre Haga (Beta) rounded out the field, albeit just a single mark from qualification.

Toni Bou (1st): “Just like last weekend I felt gradually better as the X-Trial went on and in the Final everything went perfectly; I was top in the opening two Rounds but everything was close.  This victory consolidates our lead in the Championship and underlines the great work we are doing as a team.  I’d like to congratulate my teammate Gabriel Marcelli for his excellent performance and Adam Raga who is still riding at a high level and making things difficult for me.”

Gabriel Marcelli (2nd): “Truthfully I felt great right from the start, very relaxed and not allowing myself to be disturbed by the pressure.  Today I matched the second place that I recorded in Barcelona last year and I’m happy about that, for the result itself but also what it means in terms of the Championship.  In Chalon I was very nervous, but today it was a very different night.”

Adam Raga (3rd): “Section Four ruined my run in the Final just as it did in Round Two, but I’m happy enough with a third place finish in this demanding X-Trial.  Claiming the record for World Championship appearances and continuing to fight for victories is of great value to me and I’m very happy with my consistency.”

The X-Trial World Championship remains in Spain for a visit to “the Cathedral”, Barcelona’s Palau Sant Jordi next Sunday. 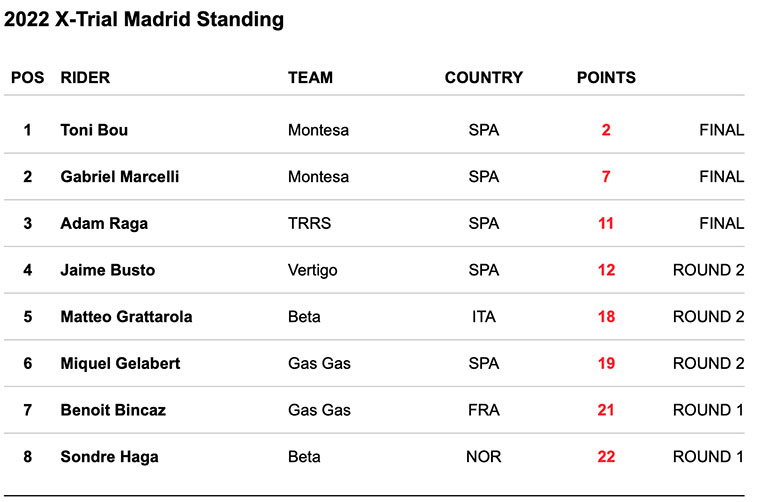