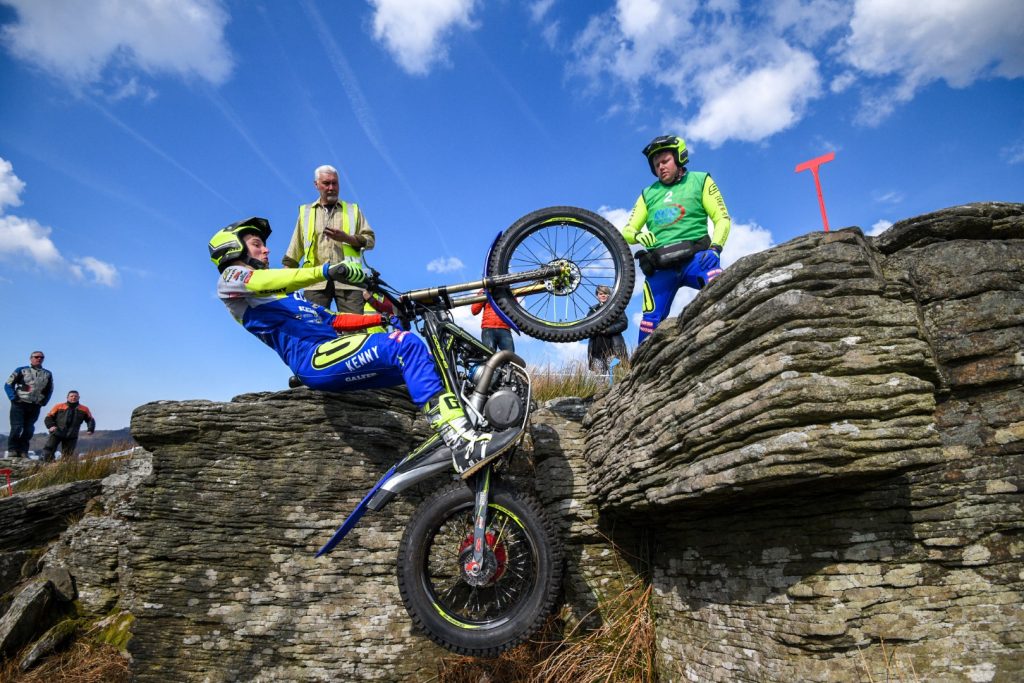 It was the turn of Jack Peace (Sherco) to take the lead in the ACU Trial GB British Trials Championship as he pushed the current champion Toby Martyn (TRRS) down into second.

This second round of the 2022 ACU Trial GB series was held at Lletty Rafel Farm, Aberdulais, Neath, South Wales where the riders competed for the St David’s Cup. With another good entry of 63 riders entered across newly-named Trial GB, Trial 2, Trial 125 and Expert classes the weather remained clear, warm and dry all day as the riders took on 12 sections, ridden over three laps. The Welsh Valleys provided a wide variety of terrain from exposed rocky outcrops to steep banks, streams and wet, wooded areas.

The 2022 championship uses the ACU Trial GB marking system introduced in 2020 which includes a one-minute time allowance for each section to be traversed, competitors may stop, go sideways or reverse without penalty. However, going backwards whilst footing will incur a five-mark penalty. An additional championship point is awarded to the best performance lap of the trial to all four classes. This round also sees the introduction of the reverse for the starting positions in the main ACU Trial GB category whereby the winner from the previous round will be the first rider to start in this class.

With the reverse starting order introduced in the line with the 2022 rules it was round one winner Toby Martyn (TRRS) who led the way opening the sections on lap one. Whilst the opening hazard offered a huge amount of grip once the riders moved out of the sunshine into the shade the conditions soon became more challenging. Riding the virgin sections first Martyn used all his knowledge and experience but as the score cards were handed in it was Jack Peace (Sherco) who held a slender lead of two marks on 23 with Martyn on 25.

As the day progressed the sections in some cases rode better but on the whole the event was turning out much more difficult than expected. Despite the changing conditions Jack Peace showed his true form as he further extended his opening advantage with an improved second lap score. On the last lap he improved his score again with the best lap of the trial on 19 marks lost to also secure the extra championship point to take a well-earned victory in front of Martyn.

Jack Peace (Sherco) : “I started well which is always a good indicator for the day with the hazards at their worst on the first lap, but they did improve as the event progressed as the warm dry air dried them out. This was reflected in my third lap score which was the best of the trial. In these situations, the tyre choice is essential with the ever-changing conditions and the feedback and feel from the Michelin tyres gave me the confidence to fight for the victory after the very keenly contested opening lap”