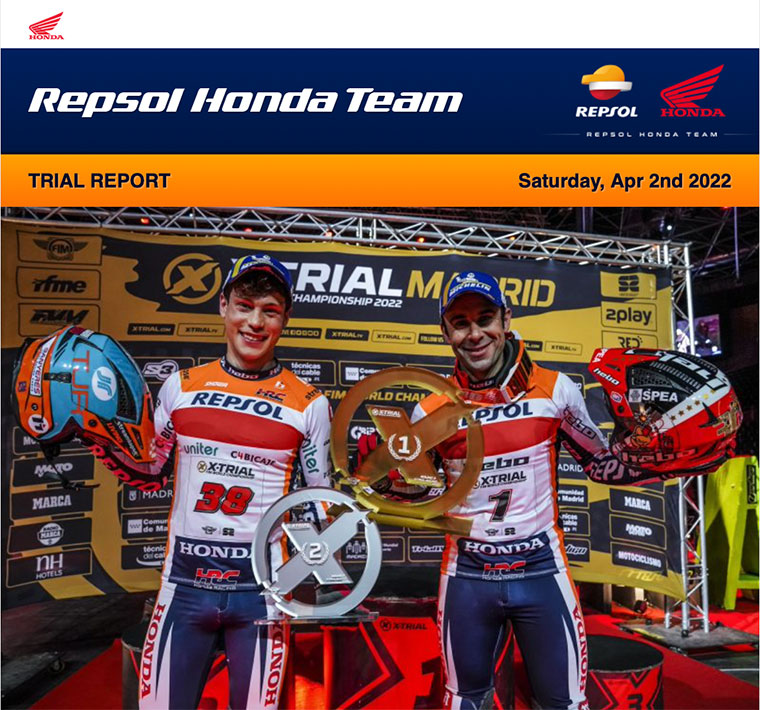 After a ten-year absence from the X-Trial World Championship calendar, Repsol Honda Trial Team once again returned to Madrid, where the third round of the season was held. Toni Bou claimed yet another X-Trial World Championship victory, making it three wins on the spin. The Catalan Repsol Honda Trial Team rider takes his tally of consecutive wins in the Spanish capital to six, five in the previous venue, the Palacio de Deportes, plus the one in the Madrid Arena. Meanwhile, Gabriel Marcelli managed to find the right sensations and keep a grip on the nerves that he had felt on his debut last week in Chalon-sur-Saône, achieving a dream runner-up spot in his first indoor participation in Madrid.

On this occasion, the Repsol Honda Trial Team duo managed to successfully overcome the opening round – no easy feat – especially in section four where all the riders received the maximum penalty. Marcelli was penalised 13 marks, while Bou tied on 11 points with arch rival Adam Raga, although the Repsol Honda Trial Team rider ended up being the fastest in the first round. In the second round, Toni Bou gave a fine display of technique and dominance, scoring just 7 marks, gaining direct access to the final as the best rider of the second round. Gabriel Marcelli, who suffered a fall in section 4, was fourth, with 14 penalty points, although he likewise managed to qualify for the final after finishing third in the overall standings. In the final, Bou continued his reign in the Spanish capital, marking a difference in the trickiest technical sections while collecting just two penalty marks. In spite of a sore ankle from the fall in the second round, Marcelli showed his determination and potential to seal second spot in Madrid.

With the win at the Madrid Arena, Toni Bou continues to edge away from his rivals in the overall X-Trial World Championship standings, adding a further twenty points for the win plus the two bonus points. Bou currently holds 65 points. Elsewhere, Gabriel Marcelli’s second place today in Madrid sees him jump to sixth place in the overall standings with a total of 16 points.

The next round of the X-Trial World Championship is set for next Sunday, 10 April at the Palau Sant Jordi in Barcelona. It will undoubtedly be a special event for the Repsol Honda Trial Team riders, given that last season Toni Bou won there, scooping his fifteenth indoor title and Gabriel Marcelli gave a magnificent performance that allowed him to climb onto the second step of the podium, similar to today’s result in Madrid.

I always arrive in Barcelona with a lot of nerves, but obviously, with this result I will feel much calmer. To achieve my third consecutive win of the season here in Madrid, with Gabriel Marcelli second and in Repsol territory, is a grand victory and a dream night. Everything went very well. It’s true that in the first and second rounds we suffered a bit more, but in the final I felt very comfortable and I was able to make the difference in section two.

I am very happy because we have repeated last year’s result in Barcelona. Today I managed to release all the pressure I had in France and I think that was the big difference, because I went into the second round with a totally different vision of the trial. The result is practically unbeatable. This podium is very positive to continue the season on the right foot. I felt very well supported by the crowd in Madrid.

The truth is that Gabriel has changed a lot in this trial compared to the previous one. At the beginning, because of his starting position, it would have been very easy to repeat last week’s result, but today he managed to be more relaxed and show all the work he has done over these months. I said it last week: I have a lot of confidence in Gabri because technically he is very well-prepared and today he showed. I’m sure he was under a lot of pressure today too, because of last week’s result and because he was at Repsol today, but he managed to overcome it all and achieve a podium that tastes like a triumph. As for Toni, in the first and second rounds he managed to score the bonus points which is very important as today he added another 22 points in the overall standings. The truth is that I’m very happy for Gabri and Toni, because both of them have been doing their homework for a long time and today they showed it. I’d like to thank the team for the great work they’ve done this week. 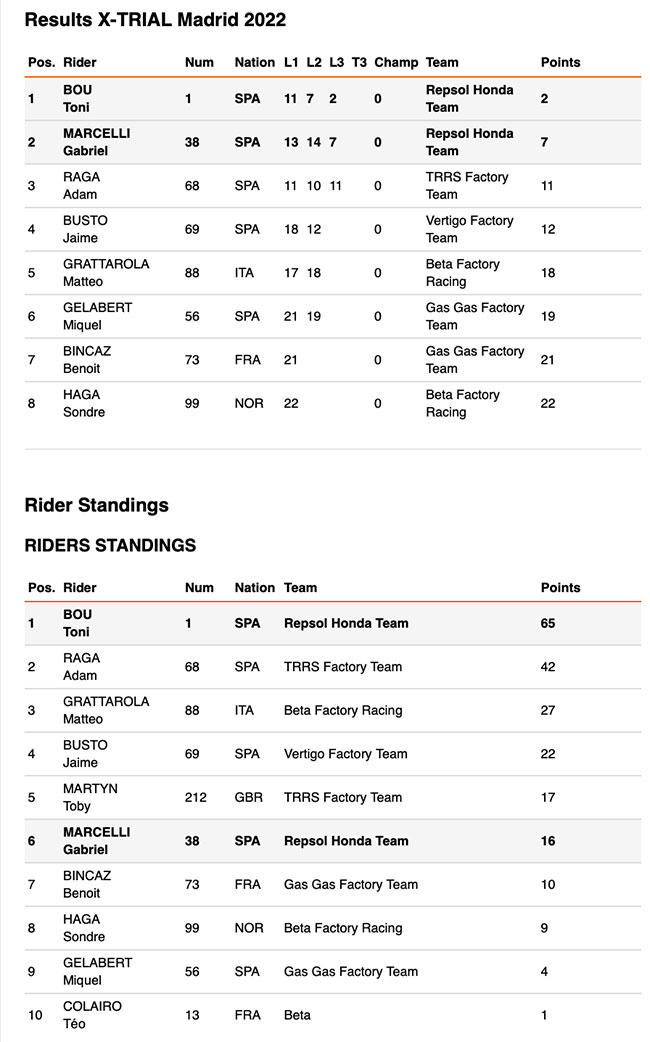