Continuing with his strong and consistent start to the 2022 FIM Trial World Championship, Miguel Gelabert has placed fifth overall on both days at the TrialGP of Germany with his weekend highlighted by a near podium result on day one. Just missing out on a top three finish by a measly three points, the young Spaniard impressed again on day two to claim fifth and now moves up to fifth in the series standings. For teammate Benoit Bincaz, the Frenchman enjoyed a notable improvement throughout the weekend to place 10th on day one, then seventh on day two. 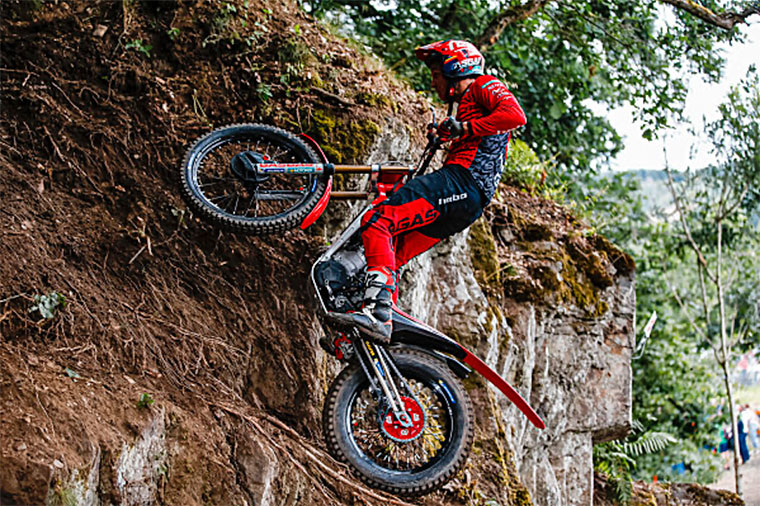 Offering up a mix of indoor style sections with classic hillside and rocky terrain, the TrialGP of Germany was a seriously demanding test for all riders. Throughout what proved to be a largely positive weekend for GASGAS Factory Racing, Miquel Gelabert and Benoit Bincaz both delivered encouraging results at a tough and technical third round of TrialGP.

In the fight for the overall podium throughout day one, Miguel Gelabert was understandably a little frustrated to not come out on top of a four-rider battle for third place. Ultimately ending the day just three points adrift in fifth, it was an otherwise positive and confidence-inspiring performance from the Spaniard.

Eager to finish the TrialGP of Germany on a high, Gelabert once again found himself locked in a battle for a place on the rostrum on day two. Frustratingly, a mixed set of results on lap one prevented any chance of a top-three finish. Turning things around for the second lap, the 24-year-old was back to his best and lost just 13 marks, the third best score of any rider, to secure another fifth-place finish. Now, with round three in the rearview mirror, Miquel advances to fifth in the TrialGP series standings.

Benoit Bincaz overcame a challenging opening day in Germany where he claimed 10th, to improve considerably and secure seventh on day two. A clean run through the notoriously difficult section 11 on Sunday’s lap two, which saw almost all of the TrialGP line-up lose full marks, showed just what the Frenchman is capable of. Bincaz now looks forward to the TrialGP of Belgium, round four of the series, next month.

In Trial2, Gianluca Tournour enjoyed a super consistent weekend of racing in Germany to claim a pair of 11th-place finishes and now lies ninth in the series standings. Jack Dance claimed 18th on day one before improving to 13th on day two.

Miquel Gelabert: “For me it was a frustrating weekend despite my results being really consistent. I should have been on the podium on day one and it was a really intense battle for the top three. On day two I was a little off but still fought for fourth place. Two fifth-place finishes is really consistent and good for the championship. I feel great on the bike so for the next round the goal is to be back up there and battling again with the top guys.”

Benoit Bincaz: “The GP of Germany didn’t quite go as expected for me. The first day wasn’t so good because I wasn’t feeling too comfy on the bike, but with the team we improved this for day two. I felt way more confident on the bike and I was able to ride better, cleaning section 11 which was quite tricky, so this shows I have the ability. It’s good to end the weekend with some positivity and now it’s on to Belgium next month.”

TrialGP Championship Standings (after round 3)