POSITIVE SHOWING FROM MIQUEL GELABERT AT TRIALGP OF FRANCE

WRAPPING UP THE PENULTIMATE ROUND OF THE 2022 TRIALGP SERIES IN STYLE, SUPER SPANIARD GELABERT COMES CLOSE TO A PODIUM FINISH 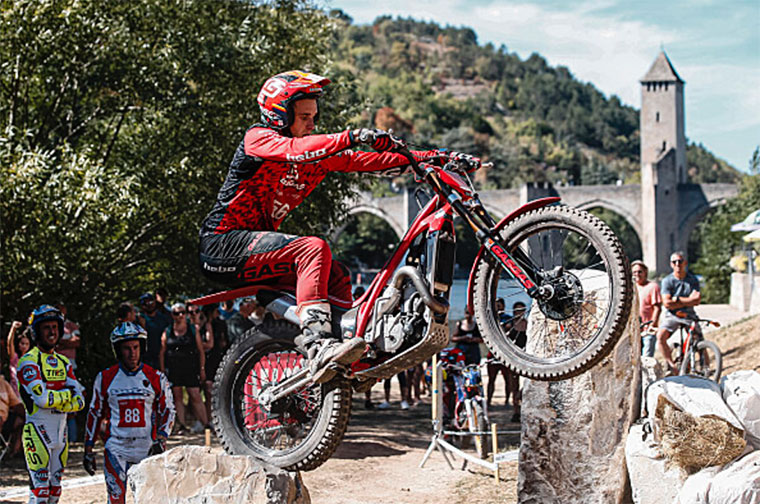 Oh, so close! Missing out on a place on the podium by just three points, GASGAS Factory Racing’s Miquel Gelabert nonetheless delivered one of his best performances of the 2022 TrialGP series to date, ultimately coming home in a well-deserved fifth place following a day-long battle in the super-competitive TrialGP class. Enjoying his home round of the series, Benoit Bincaz matched his season-best result of seventh.

Completing the first of two laps in France with the third best TrialGP class score, Gelabert blasted his way through the day’s opening 12 sections, picking up just two five-point scores to reach the mid-way point of the trial with one hand on a podium finish.

Cleaning the opening two sections on lap two, the Spaniard continued his super-strong riding, overcoming a five-point score on section three by cleaning the next five sections and arriving at the final and deciding section focused on a third-place result. Frustratingly, a costly five-point score denied him a place on the podium but having ridden well throughout the day he still claimed a strong fifth overall, just three marks from third.

Loving the support of his home fans, Benoit Bincaz saw his opening-lap hampered by some unwanted five-point scores. Getting stuck in on lap two to deliver a notably improved performance, the Frenchman rounded out the trial with a total score of 41 points, earning a solid seventh-place result.

Miquel Gelabert: “It’s certainly a mixed feeling for me after the TrialGP here in France. It was super close between a number of riders today with only a few points separating the riders from third to seventh for much of the day. I was riding really well throughout the day and pushing so hard to be on the podium. To be just two points from third, well, of course it’s disappointing, but in general the day was good. It’s been a fun trial, and now with just one round of the championship to go I’m going to keep working hard so I can give my maximum in Italy and do all I can to end the season with a podium result.”

Benoit Bincaz: “It’s been so much fun to compete here in from of my home crowd. It’s an event I’ve really been looking forward to, and with the great weather, it’s been so, so good. My riding was good today, but I made two big mistakes, which didn’t help me as things were super close between a lot of riders. I was hoping for a better result than seventh, but it’s ok, my riding was good. Now it’s on to the final event in Italy and a strong finish to the championship.”

TrialGP championship standings (after round 5)