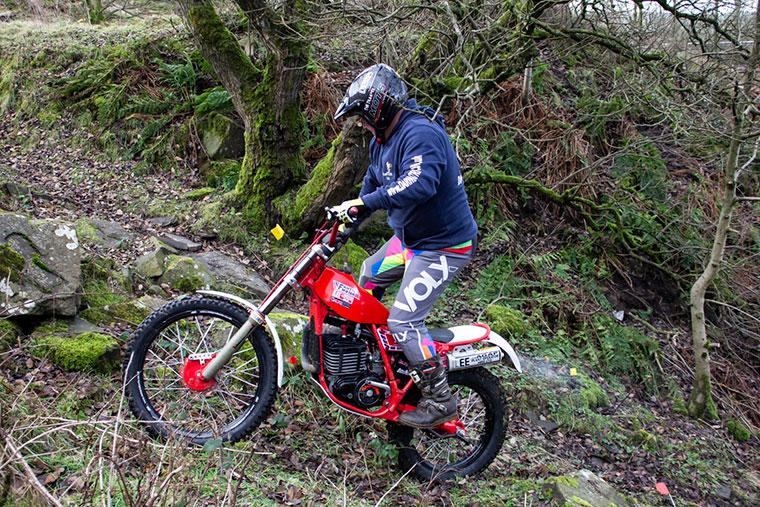 Red Rose Classic held their December trial at Warmden Quarry on a cold but dry day, though Ben, Trev, Paul and Lucas got very wet laying out the day before and 3 of them turned up to observe – thanks lads.

The sections were rocks and twists, with a blast up the stream for section 10 – not quite a ‘Butterworth World Round’ but there were one or two hairy turns and drops.

Clerk of Course Ben Butterworth reckoned section 9 was the mark taker on the hard route, but it turned out the similar style section 2 with very tight turns on rocks in a bank took the most marks from both the twinshocks and british bike riders. Not that Ben noticed as he cleaned the entire route to win the Springer over 250 class – though he was also the only rider in it.

The springer under 250 class on the hard course was a Bantam v Cub battle won by Andrew Scott’s Bantam on 14 from the Cubs Owen Hardisty, Pete Clibburn and Dave Ingram – the latter 2 tied on 36 marks lost, showing what a good ride Andrew had.

T’other Butterworth, Jack, fresh from his victory at the Costa Brava trial, lost a mere 2 to win the twinshock class on the hard route, from Graham Fallowes and Andy Cope, all on various Fantic models.

The easy route only had twinshock and under 250 springer entrants, though I’m sure I saw a rigid Bantam in action. 5 riders ended the day with clean sheets, 3 on British bikes – Steve Thomas, Carl Winstanley and Paul Charnley – and 2 on twinshocks – John Wilson and Bryan Hardaker.  A great ride by all on some tricky sections.

The next Red Rose trial will be the Paul Harrison charity trial at Fishermans Retreat, Riding Head Lane, Ramsbottom on 28th December 2021, a great way to clear the Christmas excess. Hope to see you there.