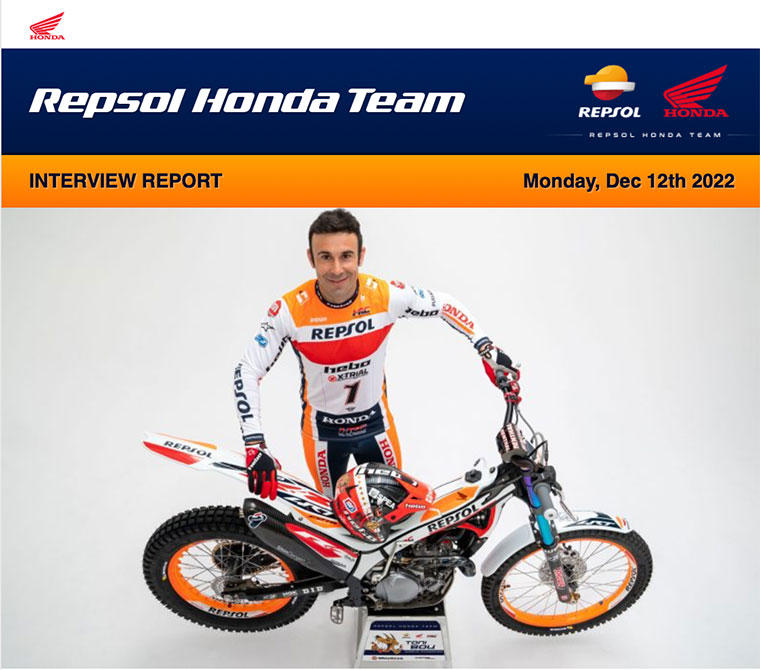 Toni Bou interview: “I would never give myself a 10, as there’s always room for improvement”

With the Trial season now over, and the Repsol Honda Trial Team confirmed for 2023, it is time to take stock and begin laying the foundations for the forthcoming season. World champion Toni Bou assesses the year’s experiences and gives some self-evaluation. Spoiler: this year wasn’t a 10.

Seven TrialGP wins in 2022 and three runner-up spots. Four wins in X-Trial and one runner-up place, plus nine bonus points out of a possible ten. This is the Toni Bou 2022 tally, concluding with another two world crowns for the Repsol Honda Team rider, who now holds 32 titles to his name. A mighty feat.

It was a great season for the Repsol Honda Team. Once again, Toni, you have won all the titles up for grabs, taking your tally to 32 world titles. And you have not stopped reminding us all season that, not just you, but the rest of the team too, have done a great job, especially over the winter. Now it’s winter and, knowing you, you’re probably already thinking ahead to 2023. Is that the case?
– Yes. Certainly we have already started working towards 2023. We had a short break in November to get some rest and for Honda Thanks Day. That was when we officially got the 2023 pre-season underway and in December we started both the fitness preparation as well as the preparation for the bike. Last year we did something similar, but without going to Japan. It was great to see the engineers again and work with them for a few days. It was highly productive and our intention was to improve on the work done the previous winter.

What have you worked on in the pre-season?
– It’s difficult. We are at a time when things are going very well and when you improve, it is hard to improve at everything. That is to say: sometimes you improve on a point that you need, but you lose something you already had. That puts you into a tricky situation. Over the year we made some changes, looking to improve certain aspects and we realise how tough it is. Sometimes there are some things that the rider can make up for with his riding, but other times less so. We try to make the bike as consistent as possible and it’s up to the rider to do the rest (with my riding style at least), but sometimes it’s not just about power; it’s about how to handle the bike.

Have you had to do a lot of work on the Cota this year?
– Well, this year I competed on two “different” bikes in the Indoor and Outdoor championships. I’m happy because we were a bit daring in X-Trial and it really paid off, winning the first four trials with the new bike. Then, in the outdoor, it didn’t feel so right, so we took a small step back and I think that’s the way forward: where I can’t make it, the bike can, and when the bike can’t make it, then I can. That’s what we are aiming at and we know it’s not easy to keep up. Good years like these recent ones… it’s difficult to achieve so many successes! We’ve had an amazing year, everything went very well but… it wasn’t our best year. It’s difficult to start up again and do things well and keep up that high motivation.

You say it wasn’t the best year because you didn’t manage to win all the trials?
– It’s hard to have a perfect season, but there have been some years when we have managed it. To repeat a perfect season is super-difficult: you have to win everything. 2022 was not our greatest year because we failed and we have failed less in other years when we performed better than this time. I am ultra-competitive, but also realistic. I’m very clear about things: it’s been a very good year; we worked very hard; we did things well… but it wasn’t our best season.

What grade would you give yourself for 2022?
– I would never give myself a 10 because you can always improve. This 2022 season has been a 7 or 8; a good season. The team, a 10. They’ve worked hard. They did a great job. They have done everything I could possibly have asked from them and I’m very grateful for that. They put a lot of effort into it and have kept up the motivation. This was the first year with Carles and also with Fuji as Team Manager and it went very well. I am very happy and I think we are going to get better.

It was also your first year with Gabriel Marcelli as team-mate. How has it been to share the team with him?
– I get on really well with Gabriel. He is a very easy-going guy and he has a great character. Having team-mates like him is very positive. He has a very high level. I have helped him as much as I could and I think he is a rider with a great future.
I see him doing better on the bike than is reflected in his results. At the end of the season he has been doing more than is expected of him, besides, being in this team is not easy. He’s been working well and settling in… A lot of new things…

With the new Team Manager Takahisa Fujinami there was not much time to adapt.
– It was tough because with Miquel Cirera we had won everything. The first year is complicated because, after 15 years of winning everything… imagine if, for whatever reason, you lose a title… it could happen, because it’s something that will eventually happen. We can’t win all the time. Fujinami has worked hard, he had no timetable, but the best thing is that he understands us as riders. He is there for whatever we need. We have seen so many times how things are done, so maybe it was easier, but whatever can be improved upon, he will certainly do it.

Physically you were in great shape at the start of the competition.
– Perfect! Physically I’ve been on form all year and I’ve felt really good. There have been moments when I’ve been very good on the bike, better than some other years, but it’s also true that we’ve also made some mistakes. It’s true that the rivals push us hard, but we also messed up sometimes. Hopefully the 2023 season will be as good as this year.

Part of your methodology is to train a lot and constantly improve!
– It’s a very complicated thing. And because I’m very demanding, I know I can improve. Even the good seasons we’ve had could have been improved upon. Anything that can be improved on the bike could help me to take a step forward. As far as riding goes, I think I am close to my limit, but if we improve on the bike we can keep moving ahead.

If we talk about rivals… it seems that they never let up. On the contrary, this year you have had, in addition to your great rival of the last 16 years (Adam Raga), Jaime Busto, and Matteo Grattarola.
– I think there are two or three very important points: there is a group with more top riders than other years, with five riders who can win trials or be on the podium. Also, the trials are easier, so more people are in the fight and more things could happen. At the moment, this has benefited us because being more regular than others has given us a title with a big points advantage: when we haven’t won, we’ve finished runner-up. With seven wins and three second places, it is a super all-round championship and those who have finished second and third, in several trials have ended up off the podium. This gives you more peace of mind in the championship.
When I say that we have made mistakes, it is precisely that: in some trials we were close to finishing fifth or sixth. This year it was really easy for that to happen as there is no room for any mistakes!

The current sections are something that conditions the results: easy trials lead to more equality and a greater number of rivals in the battle for the win.
– It’s partly normal, because it’s more even; but this is entertainment, and you have to put on a show. There have been easy trials, with few marks, and others that have been less easy. I think the level of the riders is so high among the frontrunners that it guarantees that points are scored. If the level were any lower, there would be no show.

Let’s talk about the 2023 season. It looks like there will be a few more trials than in 2022 and in X-Trial a split championship with a few more events. What is your take?
– This comes after a few years with just a few events, so having 8 indoor trials and 12 outdoor races is already good. It is important to have more dates in the calendar in both competitions. It is also true that we would like to hold one competition and, once it is over, start another one. If we don’t finish the indoor championship and start the outdoor one, it’s not the best thing, but if instead of having just 4 events there are going to be 8, then… so be it!