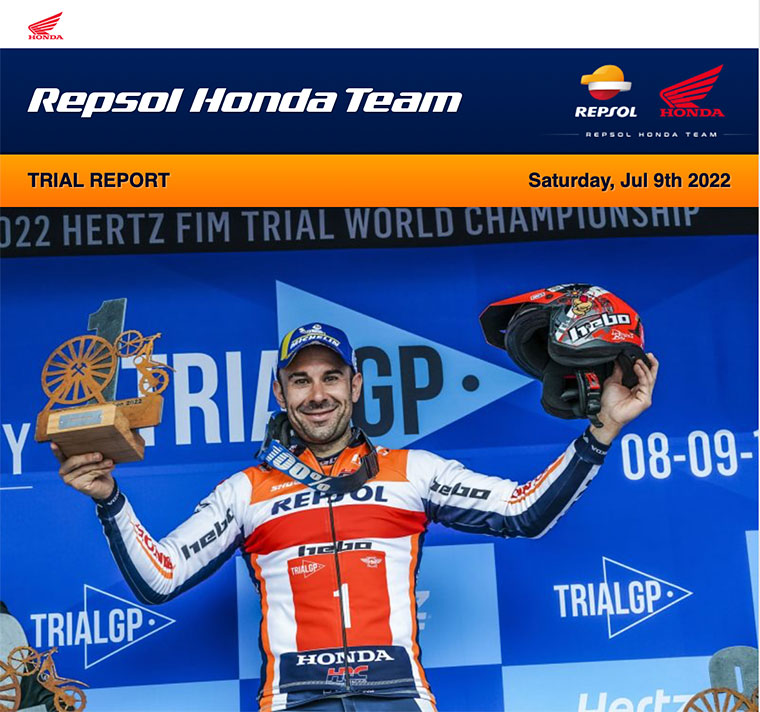 The Repsol Honda Trial Team rider finished on the top step of the podium after day one of the TrialGP of Germany held in Neunkirchen. Team-mate, Gabriel Marcelli, concluded the day in eighth spot.

After a six-year absence from the calendar, the TrialGP World Championship was once again back in Germany, this time at a new location: Neunkirchen. There, riders found a tricky and fairly high level course, having to tackle a lot of artificial stone and rock-filled sections, plus wooded areas with plenty of ramps. Section 11 proved to be particularly taxing with the entire field picking up the maximum marks on both laps.

Toni Bou pulled off a resounding triumph at the newly-opened Neunkirchen venue. The Repsol Honda Trial Team rider gave a fine display of his riding prowess, dominating both laps from start to finish, in spite of struggling in section 11. Today’s win sees the Catalan rider continue to edge further away at the top of the overall leaderboard on 94 points, 18 more than his closest rival.

Day one of the TrialGP of Germany was less positive for Gabriel Marcelli. The Repsol Honda Trial Team rider was low on confidence due to the recent infection after a left leg injury, which forced him to take a more prudent ride, especially around the opening lap. Marcelli posted eighth place on the day, although the Galician rider hangs onto seventh place in the overall standings, on 49 points.

The German Trial GP action continues in Neunkirchen tomorrow, kicking off at 09:00

I’m very happy with how the trial went today, from the beginning I felt comfortable with my riding. We did a great job with the bike, although it’s true that we had some problems with sections with the big walls, where normally I don’t usually fail so much. We’ll try to fix it for tomorrow, even so, today we picked up a great win. The points we bagged today are very important towards the championship. Everything is very tight, in fact, Adam was sixth today, so we have to be very consistent and try to stay ahead.

These last two weeks I have not been able to touch the bike. They gave me the until just the same day that we travelled here, so being here is a very positive thing in itself. There was a good chance that I wouldn’t be able to compete, but we knew it was important to pick up points for the championship. It’s true that, after getting on the bike, I feel that I could have done better. The result is not what I expected, even though things were looking bad a few days ago. For tomorrow, we know we can do better and we will push even harder.

Today Toni showed who Toni Bou really is. It has been almost perfect and, in addition, several riders have made quite a few mistakes, with which in the end he has achieved a fairly wide advantage from the first lap. On the second, Toni rode quite well, correcting some mistakes he had made during the first lap. These points are very good towards the championship, as we are reaching the halfway point of the season and he is now 18 points ahead of Jaime and 21 points ahead of Adam. We are very pleased with Toni’s riding.

As far as Gabri is concerned, he started the first lap with a bit of insecurity, after two weeks without getting on the bike and having to go to the hospital. In these circumstances it is impossible to arrive at the trial at 100%, but he was able to go out and compete and, especially in the second lap, he managed to calm himself down to fight among the frontrunners, although he eventually finished eighth. We want to thank the medical team that has treated him these days and our physiotherapist, Oriol, for his help with our riders.

Bou in charge in Germany

Bou at the double